Scientists at a Colorado lab are developing a mutant enzyme that quickly breaks down plastic as well as a lightweight plastic composite that is stronger and easier to recycle; Alicia Acuna has the details.

"I've been going to some places fairly frequently for the last 15 or so years," he said, "and the prevalence of plastics that I've observed anecdotally in the ocean has certainly increased at least in the places that I frequent."

Beckham's sorrow about the situation has turned into a drive to make a difference. "It's something that as a scientist and an engineer I'm very motivated to start working on it to see if we can come up with solutions to fix this big problem."

The problem is massive, according to Nick Mallos, Director of The Ocean Conservancy's Trash Free Seas Program. Said Mallos: "We know that 8 million metric tons of plastic enters the ocean every year. To put that into perspective that is roughly a New York City dump truck full of plastic emptying into the ocean every minute of every day for an entire year."

In an effort to help, Beckham and his teams have been trying to find ways to make discarded PET plastic, the kind used in bottles, containers and polyester, more valuable to recycle, thus giving people a reason to keep it out of landfills and waterways in the first place.

"You don't find many aluminum cans in the ocean because there's a good way to recycle aluminum," points out NREL Director Martin Keller. "It's an established, very well-developed method. So we need the same type of recycling method for plastic."

PLASTIC IS 'RAINING' ON THE ROCKY MOUNTAINS, STUDY SAYS

One breakthrough came as a pleasant surprise while Beckham and colleagues worked with researchers in London. They were studying the structure of an enzyme in a bacteria that was found to be eating plastic outside a bottle recycling plant in Japan.

"We thought we were gonna make the enzyme worse and in doing so understand how it evolved to break down plastic," Beckham explained. "We actually accidentally made it better, which was pretty exciting."

In nature, the enzyme takes centuries to degrade PET plastic. Beckham said the mutated enzyme now does the work in weeks or months, "And we're working to make it where we can actually get it down to days, which will be really exciting."

A second big breakthrough involves taking ground-up plastic bottles and mixing them with a biodegradable substance found in plants. "When we combine those in a very specific way, we can make a completely new type of plastic material that's like a composite."

BEWARE THE TOXIC ALGAE THAT CAN KILL YOUR DOG

It's the same kind of composite material already being added to fiberglass to make things like surfboards, snowboards, car parts and wind turbine blades. 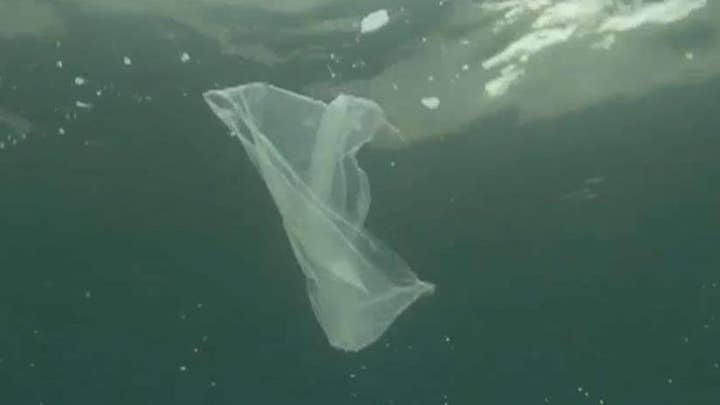 Nick Rorrer is a postdoctoral researcher at NREL who's involved in the research. "One of the awesome things about our work," he said, "is we found that when we used both PET bottles and stuff that you get from biomass, you actually get better properties than what you would get using the typical kind of petroleum recipes for the manufacturing."

The result is something not only much stronger than today's oil-based material, but lighter, too.

The hope, Beckham said, is that scientific breakthroughs like these will make plastic much likely to be reused.

Mallos said the research is exciting. "Finding new materials or new approaches to break down plastics or recycle plastics is absolutely a piece of the puzzle." He cautioned, however, that "it's critical that we don't place too much weight in any one solution. We need a comprehensive approach to solve this problem globally."

"It's one part of a multipart solution to overcoming this problem," Beckham agreed. "Part of the solution has to be reduced use of, especially, single-use plastics around the world, as well as on top of that, both governments and industry coming together to put incentives in place to reclaim waste plastics."

NREL plans to have a pilot program up and running within a couple of years that will break down a ton of PET plastic every day.  The product will be used to make turbine blades at the National Wind Technology Center nearby.