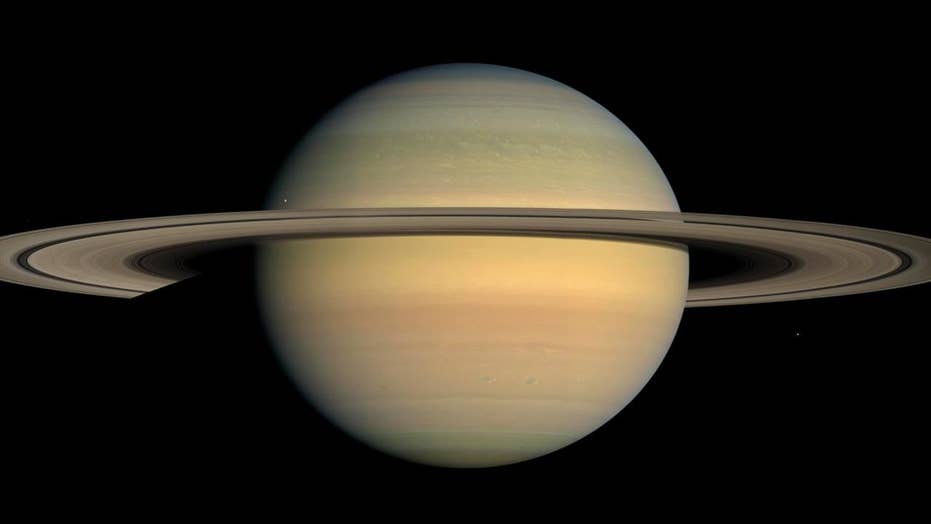 New research from NASA says that Saturn's rings, which are made of ice, are being pulled apart and could completely disappear in less than 100 million years.

Saturn’s famous rings are vanishing, so enjoy them while they last. According to NASA scientists, the rings– which are made of mostly of ice and rock, some chunks which are as big as a house– will be completely gone in less than 100 million years.

The planet's gravity is slowly pulling the rings apart, making the eroded ice particles rain down on the planet’s surface as “ring rain.” The new research builds on a few hours of groundbased–observations made from Hawaii in 2011. During those few observed hours, the rain from the rings totaled between 925 and 6000 pounds per second, enough to fill an Olympic–sized pool within half an hour.

The rings stay suspended around Saturn thanks to a carefully balanced push and pull act– the planet’s gravity is trying to pull the particles in, while at the same time their orbital velocity is trying to throw them out into space.

The new study, led by Dr. James O’Donoghue from NASA’s Planetary Megnetospheres Laboratory, describes how sometimes the ring particles become electrically charged by sunlight. Saturn's magnetic field then pulls these charged particles in, where they travel down the magnetic field lines and enter the upper atmosphere. There, the ring particles vaporize and become drops of "ring rain" that glow in infrared light.

"’Ring rain’ at Saturn is not entirely unlike rain on Earth - water falling from the sky,” NASA researcher Dr. Jack Connerney, who proposed this phenomenon in a 1986 study, explained to Fox News. “But at Saturn, the rain consists of bits of ring material that are very tiny (less than a micron in size) and electrically charged, so their motion is controlled by the magnetic field. They must move along magnetic field lines, under the influence of gravity, centrifugal force, and the ‘magnetic mirror’ force, from the source location in the ring plane (e.g., inner edge of the B ring) to the planet's ionosphere.”

The study was published Monday in the journal Icarus.

According to Connerney, since Saturn's magnetic field is axisymmetric, the ring rain originating at a particular spot in the rings "rains" down at a specific latitude on Saturn.

“Where it rains down, it has dramatic effect on the ionosphere and it even leaves visual evidence–for example, narrow dark bands that result from depletion of stratospheric haze, and less reflected sunlight,” he added. “James [O’Donoghue] and his coworkers discovered a latitudinal variation in ion density that, as predicted, is a result of the infalling material (water in the form of tiny ice particles).”

If the ring rainfall observed from Hawaii in 2011 was a typical day on Saturn, O’Donoghue and his team gathered that the rings would be gone in 300 million years. However, new data collected from the satellite Cassini, which made a "death plunge" into Saturn’s atmosphere a year ago, showed that the rain falling into the planet’s equator was at an even higher rate as the craft was pelted with the ice particles. Taking into account the Cassini data and their own research, O’Donoghue estimated that the rings have less than 100 million years to be around.

“Since the rings are losing material, in essence eroding, we can estimate the lifetime of the rings by looking at how much stuff seems to have been removed,” Dr. Connerney said. “This we did many years ago (with Ted Northrop) by comparing optical depth of material in the C-ring with that in the B-ring and attributing the loss to this erosion mechanism. We got a similar lifetime looking at the effect on the ionosphere (with Hunter Waite) also many years ago. These studies all produce estimated ring age of a few tens to 100 million years.”