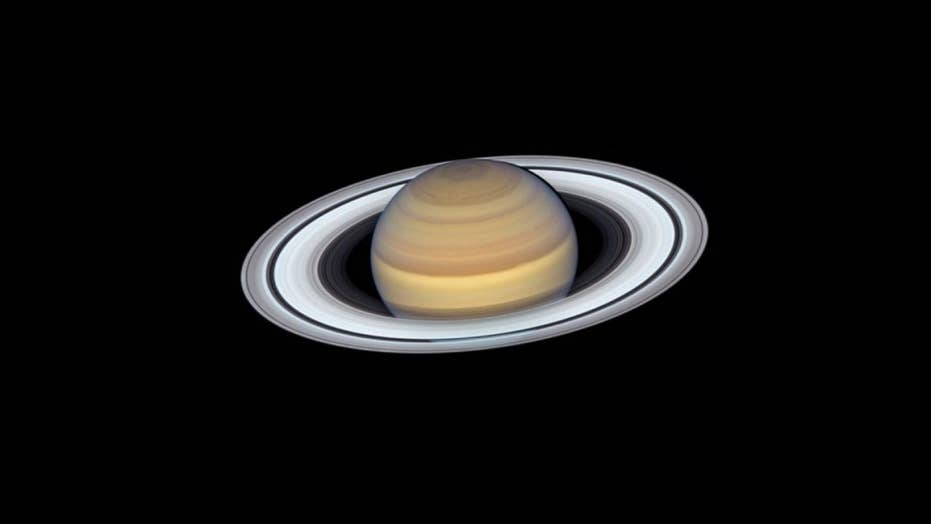 Saturn shines in latest NASA image: 'Rings are still as stunning as ever'

NASA releases new images of Saturn. The photos taken from the Hubble telescope bring a new detailed look at the 6th planet from the sun.

Saturn's rings may be shining as bright as ever, but the debate over how old they are has rekindled following a new study.

The research, published in Nature Astronomy, suggests that even though the rings might appear young in a cosmic sense, data from NASA's Cassini spacecraft shows that they are in fact nearly as old as the universe itself.

"Spectacular results from Cassini’s Grand Finale have provided constraints on the characteristics and evolutionary processes of Saturn’s rings," the study's abstract states. "These results have been interpreted as proof that the rings are much younger than the Solar System, dramatically changing our view of the origin of the whole Saturnian system and attracting the attention of scientific media outlets."

The latest view of Saturn from NASA's Hubble Space Telescope captures exquisite details of the ring system — which looks like a phonograph record with grooves that represent detailed structure within the rings — and atmospheric details that once could only be captured by spacecraft visiting the distant world.  (NASA, ESA, A. Simon (GSFC), M.H. Wong (University of California, Berkeley) and the OPAL Team)

The abstract continues: "But we should keep in mind that the age of the rings has not actually been measured (which is impossible per se) but rather is inferred. Here, we put these latest results into perspective and we point out that the young-rings hypothesis has some unsolved problems. Other interpretations, compatible with rings as old as the Solar System, are still possible."

In September 2017, Cassini was plunged into Saturn's atmosphere after an epic 20-year space journey.

Other studies have suggested that the rings, which are comprised of more than 95 percent water, could be as slightly younger than the dinosaurs. However, the study's lead author, Aurélien Crida, disputes that, citing the bombardment rate of tiny meteorites (known as micrometeoroids) and the weight of the rings.

"I have to admit that I am biased, because I like very much the model of satellite formation from rings (I contributed to develop it), and I would be annoyed if it [were] proven impossible," he told Space.com in an interview.

"But I think that, objectively, it forms a much more consistent picture, with a convincing model of their formation at the same time as Saturn, plus formation and outward migration of the satellites in agreement with the observations," he continued. "In addition, the present mass is very consistent with 4.5 billion years of evolution, so that everything fits together."

In the past, researchers have suggested that if Saturn's rings were ancient, they would be littered with organic molecules, silicates and other material. Cassini did find some organic material in the gas giant's upper atmosphere and solid grains in the gap between the planet and the closest ring, which the researchers believe adds credence to their theory that the rings are indeed ancient.

"One possible explanation is that the (unknown) process responsible for the erosion of the rings and the launch of these nanograins is actually 'cleaning' the rings, preferentially removing silicates rather than water ice," the researchers wrote in the study.

Speaking with Space.com, Crida said that identifying the age of Saturn's rings is important, as it could lead to the discovery of the age of Saturn's moons, including Enceladus. The possibility that the moon could support life has strengthened recently after researchers determined its ocean is likely 1 billion years old, placing it in the sweet spot.