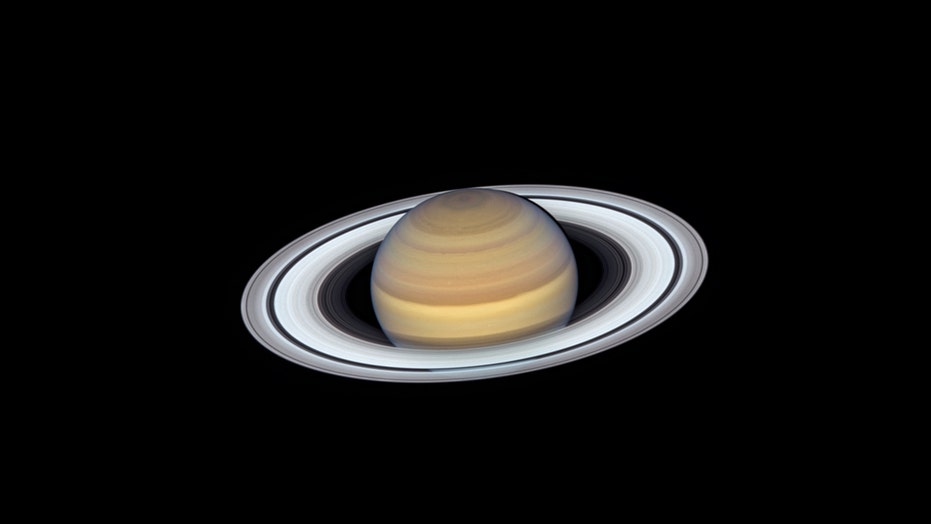 Move over, Jupiter. There's a new moon champ in our solar system — Saturn.

Researchers have discovered an additional 20 moons orbiting the ringed planet, giving it a total of 82 satellites, three more than second-place Jupiter.

Of the 20 moons, which are tiny at just 3 miles across, 17 have retrograde orbits, meaning "their movement is opposite of the planet's rotation around its axis," according to a news release announcing the discovery. These moons take three Earth years to fully orbit Saturn.

The discovery images for the newly found very distant prograde moon of Saturn. They were taken on the Subaru telescope with about one hour between each image. The background stars and galaxies do not move, while the newly discovered Saturnian moon, highlighted with an orange bar, shows motion between the two images. (Credit: Scott Sheppard)

The other three, which also take three years to circle the gas giant, orbit in prograde—the same direction that Saturn rotates in.

“Studying the orbits of these moons can reveal their origins, as well as information about the conditions surrounding Saturn at the time of its formation,” Carnegie Institution for Science researcher Scott Sheppard said in a statement.

Given their small size and the fact they're grouped in a similar manner to the outer moons of Jupiter, it's likely they are the remnants of a larger moon that orbited Saturn and was destroyed.

“This kind of grouping of outer moons is also seen around Jupiter, indicating violent collisions occurred between moons in the Saturnian system or with outside objects such as passing asteroids or comets,” Sheppard added.

An artist’s conception of the 20 newly discovered moons orbiting Saturn. These discoveries bring the planet’s total moon count to 82, surpassing Jupiter for the most in our Solar System. Studying these moons can reveal information about their formation and about the conditions around Saturn at the time. (Credit: NASA/JPL-Caltech/Space Science Institute; starry background courtesy of Paolo Sartorio/Shutterstock)

Sheppard, who also discovered 12 moons orbiting Jupiter last year, said that the small moons of planets like Jupiter and Saturn will give researchers new clues into how these planets formed.

"Using some of the largest telescopes in the world, we are now completing the inventory of small moons around the giant planets," Sheppard continued. "They play a crucial role in helping us determine how our solar system's planets formed and evolved."

There is a contest to give names to the newly discovered moons, which Sheppard said must be "named after giants from Norse, Gallic, or Inuit mythology.” Contest details can be found here.

Saturn's moons, in particular, Titan and Enceladus, have interested researchers, given their composition and age.

In July, researchers determined the ocean on Enceladus is likely 1 billion years old, placing it in the sweet spot for supporting life.