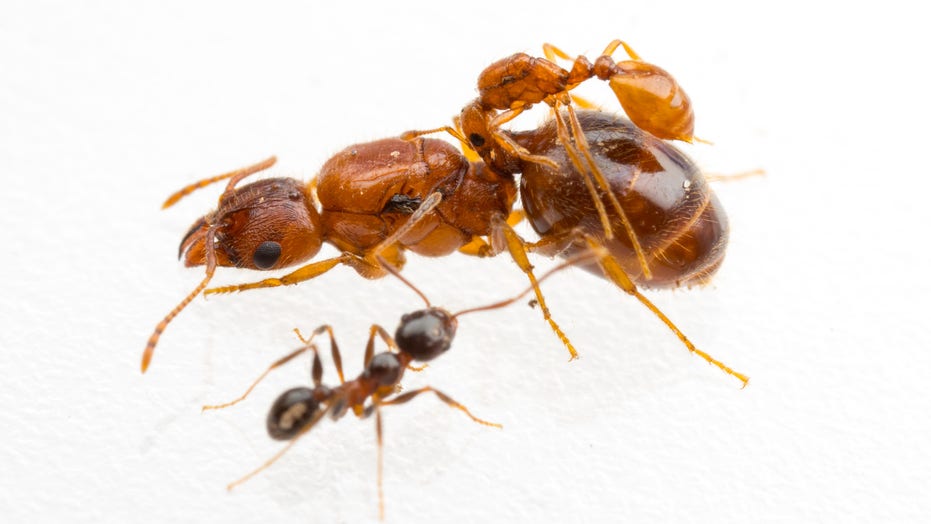 Two new species of “rodeo ants” that hitch a ride on larger ants have been discovered in The Lone Star State.

The new species were discovered by Alex Wild, curator of entomology, and lecturer in the Department of Integrative Biology at the University of Texas at Austin, and researcher Jennifer Schlauch.

"'Rodeo' ants? Only in Texas!," tweeted the Department of Integrative Biology at The University of Texas at Austin.

Just two individuals, respectively, of the new species have been discovered, according to New Scientist. Wild forwarded Fox News images of the new “socially parasitic” species - Solenopsis inquilina and Solenopsis infiltrator, on the backs of larger host ants.

Ants have been grabbing attention recently. Citing the science journal ZooKeys, Gizmodo reported last year that a new species of “exploding ants” has been discovered in Southeast Asia.

Another study recently revealed that almost 1 million “cannibal ants” were discovered in an abandoned Soviet-era bunker in Poland that was once used to store nuclear weapons. Trapped in the bunker “for years,” the insects have resorted to eating their brethren, according to researchers.

The tiny queen of a socially parasitic Solenopsis inquilina rides on the back of a host Pheidole dentata queen.  (Alex Wild/University of Texas)

Earlier this year the speed of the fastest ant in the world was recorded, with the fast insect traveling at 108 times its body length in a single second. The ant’s speed was the human equivalent of 360 miles per hour, according to scientists.