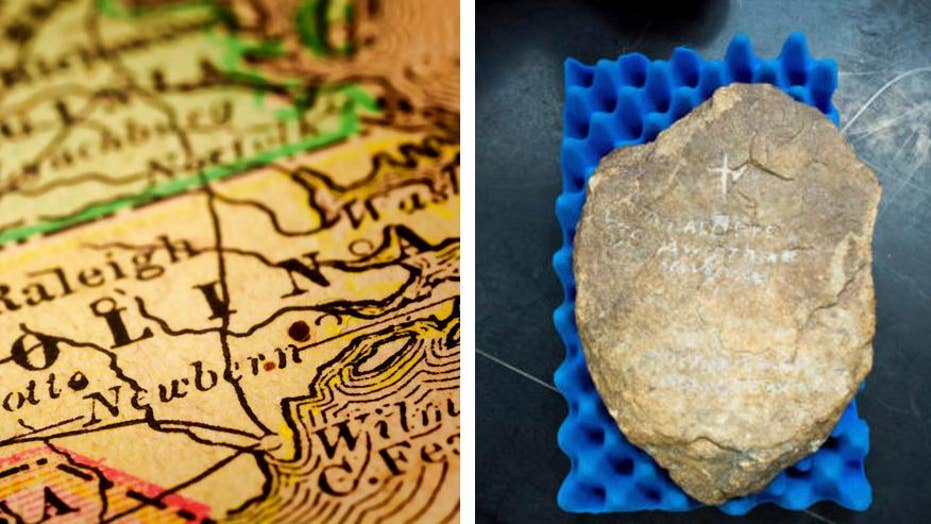 How new technology could unveil the secrets behind a rock that may have etchings that reveal what happened on the ‘lost colony.’

Scientists are planning to take a fresh look at an engraved rock purported to hold the key to the mysterious “lost colony” of Roanoke.

Described as “the coldest case in American history,” the fate of more than 100 English settlers of the 16th century on Roanoke Island, N.C., has long baffled historians. The settlers’ disappearance has been shrouded in mystery for centuries.

The settlers, who included women and children, arrived on Roanoke Island in 1587 to help establish America’s first English settlement. By 1590, however, the group was nowhere to be found, fueling ongoing speculation about their mysterious disappearance.

The only clues left behind by the settlers were the words "Croatoan" and "Cro" carved into a fort's gatepost and a tree nearby. This sparked a theory that the settlers fled 50 miles south to Hatteras Island, which was then known as Croatoan Island.

However, in 1937, a 21-pound stone engraved with strange markings was found by a California man driving in coastal North Carolina. Initially taken to the history department of Emory University, the stone ended up in the possession of Brenau University in Gainesville, Ga. The stone is supposedly engraved with a message from one of the colonists, Eleanor White Dare, to her father, John White, the colony’s governor.

White had returned to England in 1587 to request help for the colony. On his return to Roanoke Island three years later, however, he was unable to find any of the settlers, which by that time included his granddaughter Virginia Dare, the first English child born in "the New World."

“Virginia Went Hence Unto Heaven 1591,” explains the engraving, written in 16th-century English. “Father Soone After You Goe for England Wee Cam Hither,” it notes, on the reverse side of the stone, adding that “Onlie Misarie & Warre,” resulted in the death of more than half the settlers.

The engraving indicates that the remaining colonists were killed by “salvages [savages],” except for seven, who were taken captive.

The tourist who found the stone said that he discovered it about 50 miles inland from Roanoke Island, according to National Geographic. This corresponds with White’s account that the settlers had planned to move “fifty miles into the main.”

While initially hailed as a major historical find, question marks soon arose about the authenticity of the stone, and more than 40 other engraved stones that subsequently surfaced and were purchased by Brenau University.

While the majority of the so-called “Dare stones” are widely acknowledged to be fakes, the first stone, which supposedly bears a message from Eleanor White Dare, continues to fascinate historians.

National Geographic reports that analysis of the stone by the University of North Carolina at Asheville in 2016 revealed that its interior was bright white, while its exterior and carvings were much darker.

Matthew Champion of the U.K.’s Norfolk Medieval Graffiti Survey, told National Geographic that a freshly-cut inscription “would appear bright white on the stone, particularly so on this type of stone, and it takes a great deal of time for that whiteness to fade.”

Using chemicals to mask the color would have been difficult in the 1930s, according to Champion and Ed Schrader, the president of Brenau.

While some experts are still skeptical about the stone’s authenticity, Brenau’s Schrader is said to be planning a comprehensive study of the artifact in the near future.

Brenau has not yet responded to a request for comment on this story from Fox News.