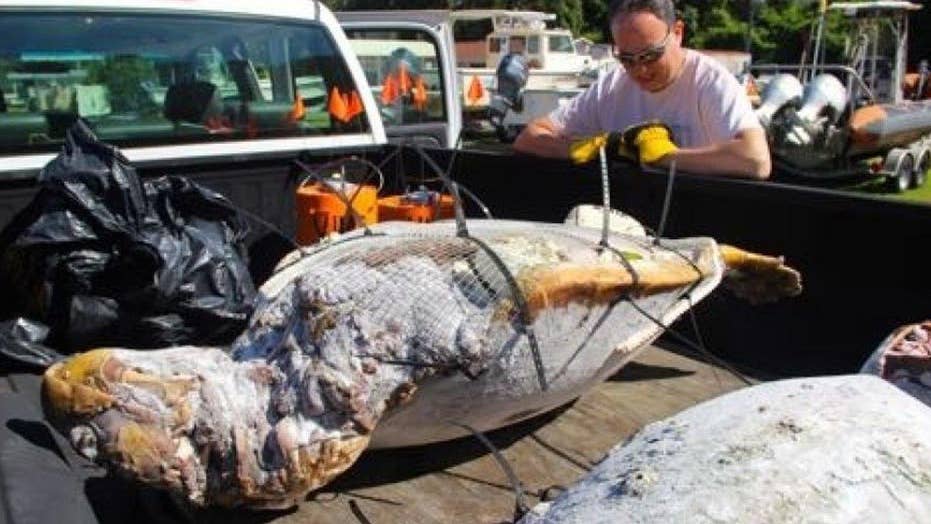 No matter how you refer to them, the fact remains: they are dead turtles filled with styrofoam, held together with zip ties, GPS units attached to them. And they’ve been sent on a final, post-death trip.

Researchers from the Virginia Institute of Marine Science have in fact released two such Frankenturtles into the waters of Chesapeake Bay, part of an effort to understand where and why loggerhead turtles are kicking their turtle buckets.

Related: One out of three on Earth live in places too bright to see the Milky Way

The zombie turtles came from the Virginia Aquarium's Stranding Response Program, and were hefty: one weighed 150 pounds, the other 70. (One of them was killed by a boat, and the scientists aren’t sure why the other one died.) Not only did the scientists deploy the Frankenturtles, they’re also using orange turtle models made of wood and styrofoam, as well as bucket drifters, as part of their research.

Each year, dead turtles wash up on the shores of Chesapeake Bay. These researchers want to understand why, and are thus working on a "turtle carcass drift model,” using the zombie turtles, the wood-styrofoam models, the bucket drifters, and GPS tracking.

The scientists hope that the two turtles who unknowingly gave their bodies to science will help prevent other turtles from dying.

"It might seem sort of gross, but it's a good way to reuse a dead turtle that would otherwise be buried," David Kaplan, an assistant professor of the Virginia Institute of Marine Science, said in a statement. "And hopefully, the deployment of our two Frankenturtles will ultimately help lower the number of turtle deaths in the future."

The data from the different types of objects— the Frankenturtles, the models, and the buckets— will help the researchers figure out how dead turtles drift; they may not travel through the water the same way the buoyant artificial turtle models do, for example.

"If our model can accurately simulate how winds and currents act on a dead sea turtle, we should be able to backtrack from a stranding site to the place where the turtle likely died," Bianca Santos, a graduate student involved in the research, said in the statement.

Related: Watch this endangered monkey 'chat' with a camera

The scientists released the Frankenturtles on June 13. It’s estimated that 100-300 loggerhead turtles— a threatened species— wash ashore each year, but more turtles than that may in fact be dying.