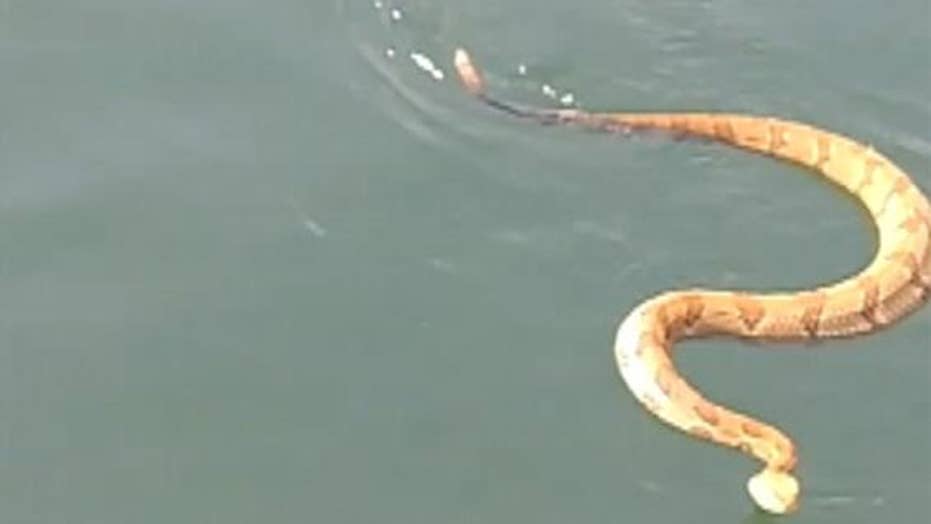 Rattlesnake attempts to board boat

Boaters are in a state of panic as a rattlesnake attempts to board.

A family spending the day on Fontana Lake in North Carolina was shocked to see a rattlesnake swimming toward their boat.

On July 14, Wayne Robbins, his wife and two children, along with four children with limb differences with the Adventure Amputee Camp, were enjoying a summer day on the lake when a timber rattlesnake slithered toward their boat. Robbins’ 14-year-old daughter, Kathleen, captured video of the terrifying scene, which Robbins posted on Instagram the next day.

Children can be heard screaming in the background of the video, which has garnered more than 2,000 views.

“Oh my god!” one child screamed.

“Drive now!” another child can be heard yelling as the snake attempted to climb aboard the boat.

At first, Robbins, of Knoxville, Tennessee, didn’t fret too much; he and his wife thought the snake would swim by the boat before moving away from it.

But when the rattler kept coming toward them, Robbins began to worry.

“We thought he was being extremely aggressive, but it turns out he was just very desperate to get out of the water. When he began heading toward the boat, my wife and I became concerned he could be a problem,” Robbins told Fox News.

Robbins, who was volunteering with the Adventure Amputee Camp, was also worried for the children who “did not have their prosthetics with them and do not move so easily." There were also two counselors on a tube behind the boat, which made it difficult to move forward.

“I would have drug them into the snake, and I knew it could climb onto the tube with them. So simply pulling away was not an option,” he said, adding that it was “pretty crowded and the kids were fairly excited, so getting something from under the seats to deter the snake with was going to take some time.”

At one point, the snake paused for a few seconds on the back of the boat before it turned to head toward the shore.

Despite the scare, Robbins said several of kids on the boat “got back in the water that day with no concerns at all."

"We have been back on the water several times since then and don't hesitate,” he added.

Rattlesnakes can swim, the California Department of Fish and Wildlife confirmed. Timber rattlesnakes, more specifically, are capable of swimming on the water’s surface and under it.