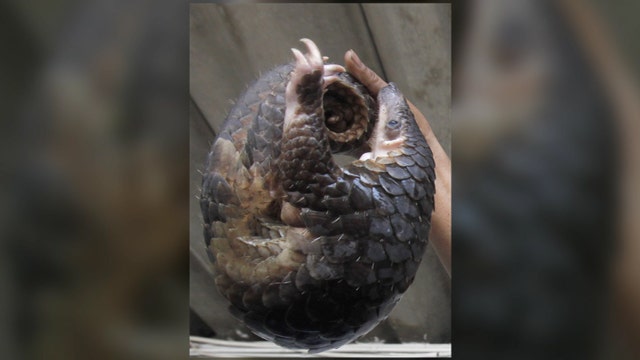 What is a pangolin?

Will this creature go extinct before most people know it exists?

In the videos, the blunt-nosed creatures — which are the only mammals with scales — are seen meandering about the undergrowth, sniffing for food and danger. In one clip, a baby pangolin rides on its mother's back. In another, a pangolin shimmies partway up a tree trunk. Another pangolin gets (rather adorably) tangled in a stick and marches off with the vegetation wrapped around its torso. [Pangolin Photos: Scaly Mammals Threatened with Extinction]

The videos were collected by researchers from Chester Zoo in the United Kingdom, alongside Rhino Fund Uganda (RFU). Though, as the name implies, that organization works to protect rhinoceroses in Uganda, rangers working for RFU kept running across giant pangolins while on patrol. When the Chester Zoo approached the organization about studying the creatures, the RFU staff jumped at the opportunity, according to a statement.

Aside from their shared habitat, giant pangolins (Smutsia gigantea) have something else in common with rhinos: Their scales are made of keratin, the same stuff that makes up rhinoceros horn (and human hair and fingernails). The scaly mammals are found mostly across central Africa and can weigh as much as 77 lbs. (35 kilograms).

But pangolins are threatened: The International Union for Conservation of Nature lists the animals as "vulnerable." That's in part because climate change is altering their habitat and in part because humans hunt the animals both for food and to sell on the black market. (In traditional Chinese medicine, pangolin scales have long been used to treat a laundry list of ailments.)

Giant pangolins eat insects; they slurp up creepy-crawly meals with their long, anteater-like tongues. But other than that fact, little is known about pangolins' habits, given their secretive, nocturnal lifestyles. The Chester Zoo and RFU have now installed 70 motion-sensor cameras in Uganda's Ziwa Rhino Sanctuary to detect giant pangolin movements. Researchers are also on the lookout for footprints, burrows and dung. The scientists are collecting the latter to study the animals' genetics and diet.

"These rare glimpses into the lives of giant pangolins are very exciting for those of us dedicated to protecting Uganda's rich wildlife, and [it] challenges us to ensure that we protect and conserve this highly threatened species for future generations," Sam Mwandha, the executive director of the Uganda Wildlife Authority, said in the statement.

The Ziwa Rhino Sanctuary is the only area in Uganda where rhinoceroses (specifically, the southern white rhino subspecies) roam free. Other animals that call the sanctuary home include parrots, cranes and the fearsome shoebill stork (Balaeniceps rex), which grows as tall as 55 inches (140 centimeters) and sports a massive, bone-crushing beak.