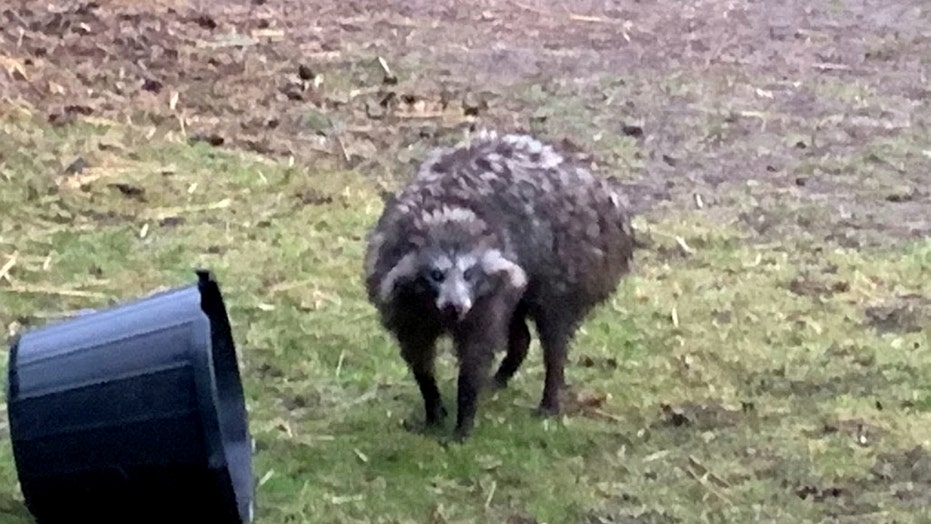 A wild raccoon dog has been terrorizing a U.K. village, terrifying locals and attacking pets.

SWNS reports that police were called to Clarborough in Nottinghamshire this week after some residents were subjected to a two-hour standoff with the strange-looking animal.

Villager Mandy Marsh was woken by a “blood-curdling scream” early on Tuesday morning and her husband Dale ran outside to see a raccoon dog confronting the couple’s pet goat and pony. "He came back and he said to me 'you are going to have to come and see this, there is something in the field attacking the pony and I have absolutely no idea what it is’,” she told SWNS.

"This raccoon was absolutely crazy. It was hissing and screaming and snarling,” Marsh added. “It was going absolutely mad.”

The raccoon dog roaming in the paddock next to Mandy Marsh's home. (SWNS)

Armed with planks of wood, it took the couple two hours to chase the angry raccoon dog away, although their pet goat was left with a sore shoulder and scratches following the animal’s attack.

The raccoon dog returned moments later to confront a dog walker outside the March’s home, according to SWNS.

Police have warned local residents to be vigilant.

Two raccoon dogs went missing from a nearby enclosure on the morning of May 28, according to Nottinghamshire Police. “The animals, which are described as being the same size of a medium-to-small-sized dog, are potentially dangerous if approached as they are not domesticated,” it added, in a statement.

Marsh said that a local wildlife tracker offered to help track the raccoon dogs and had told her that something had been attacking local animals recently.

Mandy Marsh with her pet pony and goat. (SWNS)

Raccoon dogs are not raccoons, but are members of the canid, or dog family, according to the U.K.’s Royal Society for the Prevention of Cruelty to Animals (RSPCA). They are related to foxes and wolves.

“Raccoon dogs are wild animals - rather than domesticated pets,” it explains, on its website, noting that the animals pose “a highly invasive risk” to native species in Europe.