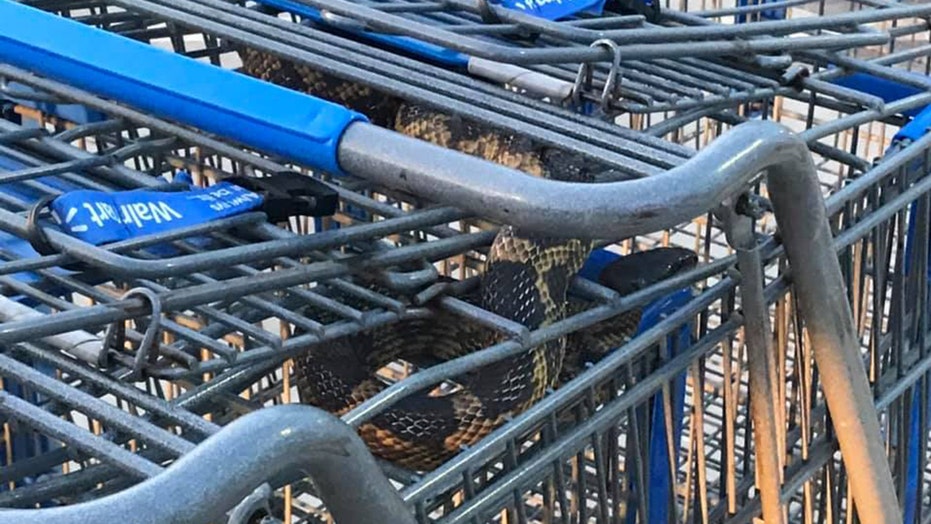 Be careful which cart you choose — there may be a slithering surprise waiting inside.

A cart attendant at a Walmart in Texas got quite the scare on Friday after discovering a large rat snake in a group of shopping carts.

The Northeast Police Department said in a Facebook post that the reptile had worked its way into the group of carts at a return area of the Walmart in Cross Roads, located north of Dallas.

"A loud scream across the parking lot at Walmart drew the attention of an NEPD Officer who was patrolling the area, at dusk this evening," the department said.

A large ratsnake was discovered in a group of shopping carts at a Walmart in Texas on Friday. (Northeast Police Department)

Officials called in a man known as "The Snake Charmer," identified as John Heckaman of Savannah, Texas, who helped in relocating the snake.

An officer discovered the large rat snake after hearing a "loud scream" in the parking lot of a Walmart in Texas. (Northeast Police Department)

Heckaman, however, was bitten once during the process, according to police.

"Recent heavy rains are forcing a lot of snakes out of their natural habitats, and this goes to show, that they can turn up just about anywhere," police said.

Rat snakes are non-venomous and typically found in fields and woodlands across the country, including Connecticut, the Carolinas, Kansas and Oklahoma, according to the National Wildlife Federation.

The one person bit by the large rat snake was a man known as "The Snake Charmer" brought in to contain the reptile. (Northeast Police Department)

“Black rat snakes are excellent swimmers and climbers. They will use these skills to catch a variety of food, from bird eggs to frogs,” the federal agency says online. “They are the snake most likely to be seen around buildings hunting for rodents, amphibians, and young birds. Black rat snakes are constrictor snakes and will use their body to suffocate their prey.”

According to the North Carolina Wildlife Resources Commission, rat snakes mate in late May and early June.