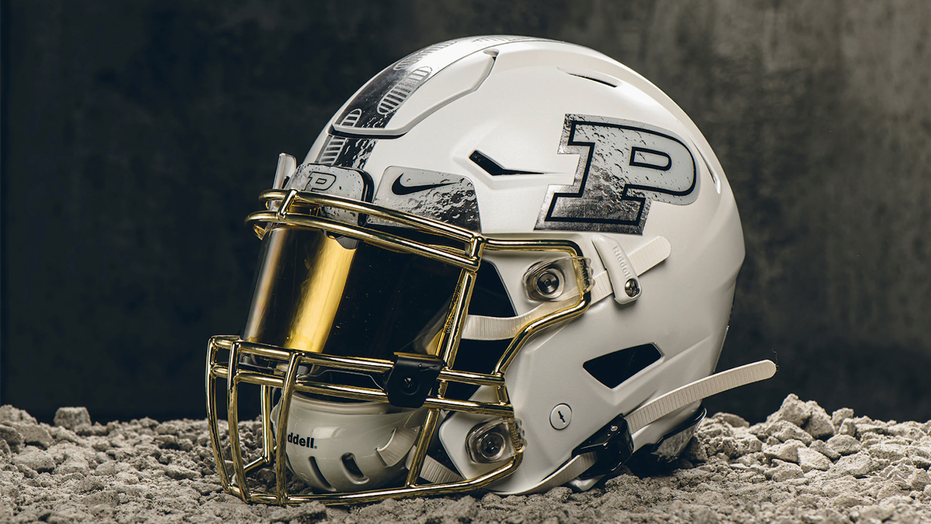 To celebrate the 50th anniversary of Apollo 11, Purdue football players will wear a moonwalk-inspired helmet and commemorative astronaut-themed patch during Saturday’s homecoming game against Maryland.

Purdue is the alma mater of a host of astronauts, including Neil Armstrong, Gus Grissom, who was the second American in space, and Gene Cernan, the last man to walk on the Moon. The West Lafayette, Ind. school, dubbed ‘the cradle of astronauts,’ counts 25 former and current astronauts among its alumni.

Designed to resemble an astronaut’s helmet, the Boilermakers will take the field on Saturday wearing white helmets with a chrome gold mask. A gray and white Moon pattern on the helmets honors Armstrong and Cernan, and a center stripe commemorates Armstrong’s famous first steps on the lunar surface.

The helmet stripe also features the numbers 2, 25 and 64 — two Purdue alum walked on the Moon;  25 total Purdue astronauts; and 64 space missions completed by the school’s alums.

Purdue players will wear the moon-inspired helmets for the homecoming game against Maryland. (Purdue University)

Additionally, a mission sticker with the Griffin from Purdue’s crest placing the school’s flag on the surface of the Moon will be featured on the back of the helmet. The school’s anniversary motto “150 years of giant leaps” is also incorporated into the sticker design.

A patch with the same design will also be on the players’ jerseys for the game against the Terrapins.

In 2012, Purdue honored Neil Armstrong with a special helmet decal during a game at Notre Dame.

The Boilermakers will take the field wearing white helmets with a chrome gold mask, which is designed to resemble an astronaut's helmet. (Purdue University)

Some 13 Purdue astronaut alums will be attending Saturday’s homecoming game, including NASA astronaut Drew Feustel, who is a veteran of three spaceflights. Beth Moses, who became the first female commercial astronaut on Virgin Galactic’s spaceplane earlier this year, will also attend.

During a recent interview, Feustel told Fox News that America’s return to the Moon could unlock a vast trove of space resources.

NASA’s Artemis program aims to land American astronauts on the Moon by 2024 and establish a sustainable human presence on Earth’s natural satellite.

Purdue’s game against Maryland kicks off at noon ET Saturday.