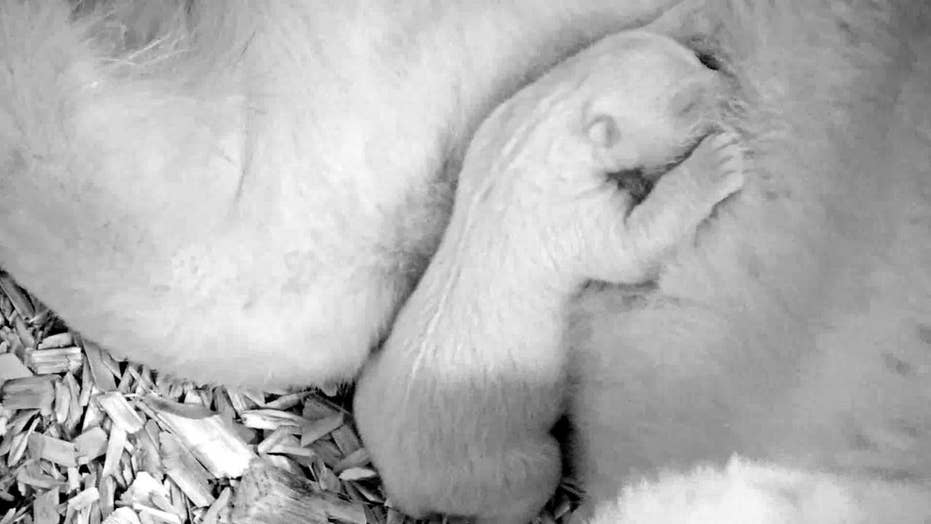 A 14-day-old polar bear cub was caught on video at the Berlin Zoo snuggling with its mother.

There's only one word to describe this — aww.

A polar bear cub no bigger than a guinea pig was caught on video at the Berlin Zoo snuggling with its mother, SWNS reports. The cub is just 14 days old and is spending the majority of its day curled up to its mother in a nesting cave where not even zookeepers are allowed. New camera technology caught the heartwarming moments.

The cub, which has not been given a name yet, will eventually open its eyes and ears when it turns approximately a month old, but for now it is relying on its mother, Tonja, for safety.

"So far we are very satisfied with the development," Dr. Florian Sicks, curator of the polar bear exhibit said. "As in the last few years, Tonja takes excellent care of her offspring.”

The cub's eyes and ears will open when it is around 30 days old but for it now relies on momTonja to keep warm and safe. (Credit: SWNS)

The cub's father, Volodya, joined the Berlin Zoo during the summer but is not involved with raising the cub, as polar bears largely live alone. Dr. Sicks added that right now, the cub is getting nourishment once every two hours.

The mortality rates for newborn polar bears is exceptionally high. In the wild, approximately 85 percent do not live for more than two years. Classified as vulnerable by the World Wildlife Fund, there are estimated to be only between 22,000 and 31,000 left on Earth.

A polar bear cub the size of a guinea pig looks to be dreaming of a white Christmas in adorable secret footage. (Credit: SWNS)

"Because of ongoing and potential loss of their sea ice habitat resulting from climate change, polar bears were listed as a threatened species in the U.S. under the Endangered Species Act in May 2008," WWF writes on its website.

Classified as marine mammals because they spend much of their lives in the Arctic Ocean looking, polar bears have jet black skin. Their fur is translucent and appears white because it reflects visible light, the WWF adds.

While they spend much of their lives in the water, swimming constantly for days at a time, less than 2 percent of their hunts are successful.