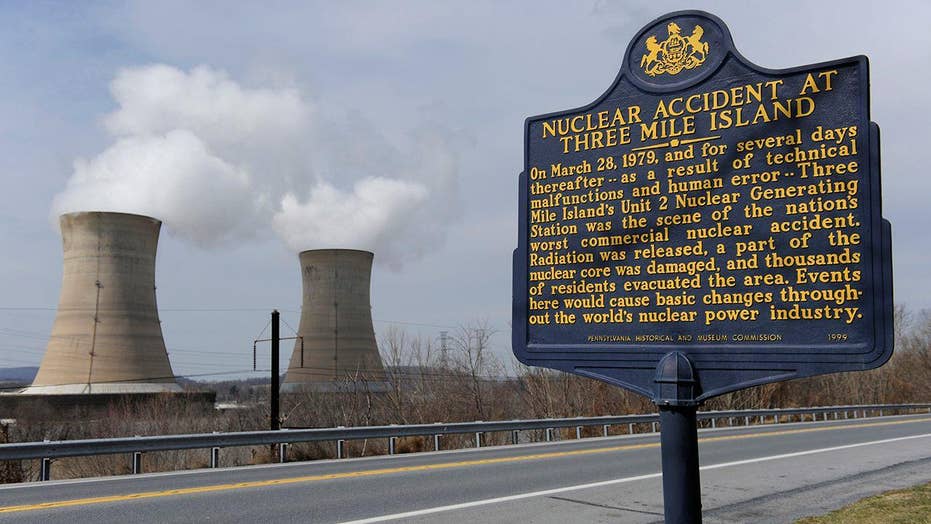 MIDDLETOWN, Pa. -- The clock is ticking for Pennsylvania lawmakers, who must decide whether to support House Bill 11, the bill introduced by Rep. Tom Mehaffie, R-Dauphin, that would commit $500 million annually to rescue the state’s struggling nuclear industry over the next six years.

If approved, it would effectively save two of the state’s five nuclear plants, Three Mile Island (TMI) and Beaver Valley, which both have announced plans to close years before their operating licenses expire.

FILE - In this file photo of Nov. 2, 2006, cooling towers of the Three Mile Island nuclear power plant are reflected in the Susquehanna River in this time exposure photograph in Middletown, Pa. (AP Photo/Carolyn Kaster, File)

The long-awaited legislation would update the Alternative Energy Portfolio Standards Act of 2004 to allow carbon-free energy producers — including nuclear power plants — to take advantage of a credit program that would bring them additional revenue.

Under the existing law, the state's about 200 electricity suppliers must purchase alternative energy credits from two tiers of producers — including sources such as wind, solar and hydroelectric — and those credits must equal 18 percent of their electricity sales by 2021.

The update would add a third tier to the law in which the state's 11 electricity distributors must buy credits from carbon-free energy producers that equal 50 percent of their sales each year.

Twenty state representatives, including Mehaffie, are listed as sponsors.

Mehaffie has also garnered national supporters like the Nuclear Energy Institute, which believes financial subsidies would put all the companies on an equal footing.

“We need to look at the fact that nuclear offers the same value composition [as renewables] as far as no carbon and no emissions, and they need to be treated on an equal playing field,” said Maria Korsnick, president and CEO of the Nuclear Energy Institute.

Korsnick, a strong proponent of the bill, believes Pennsylvania has an opportunity to be a model in a market where nuclear has been nationally ignored as a major job creator and carbon-free energy generator.

“What’s happening in Pennsylvania is a microcosm for the broader United States,” said Korsnick. “And it’s so important these plants get attention and recognition because they demonstrate what’s happening nationwide, which is the current market does not value the attributes of nuclear.”

But while there is support, there is also mounting opposition from federal energy regulators. In New York, New Jersey, and Illinois, which approved similar laws, there have been legal challenges over protecting ratepayers from higher electricity prices.

Environmentalists are also among the growing list of opponents. Maurice Sampson, the Eastern Pennsylvania Director of Clean Water Action, said the bill is unsustainable and does nothing for renewable energies like solar and wind.

“It’s unacceptable,” said Sampson, “We need to catch up with the rest of the world in terms of getting us to renewable energy sources versus an outdated and dangerous technology, which nuclear energy is.”

Environmentalists say state lawmakers also have a fiscal responsibility to explore renewables because they are inherently local and has the potential to employ a more diverse group of workers from various sectors.

The Delaware County Chamber of Commerce, Central Pennsylvania Building and Construction Trades and other local unions are in support of the bill.

Currently, nuclear plants generate 42 percent of the state’s electricity and 93 percent of its zero-carbon electricity; and employ an estimated 16,000 workers.

Regional jobs that Christina Simeone, a research fellow at the University of Pennsylvania’s Kleinman Center for Energy Policy, says are a key part of the conversation.

She believes the focus for all parties should be creating competition and spurring innovation, not rewarding bailouts that run the risk of potentially favoring one industry over another.

“An ideal policy is going to put a penalty on carbon emissions and let lower, zero-carbon emitting resources compete in the market to provide power,” Simeone said.

Time is running out for lawmakers who have until September 30, that’s when Exelon plans to shut down its Three Mile Island plant if financial aid cannot be agreed upon.