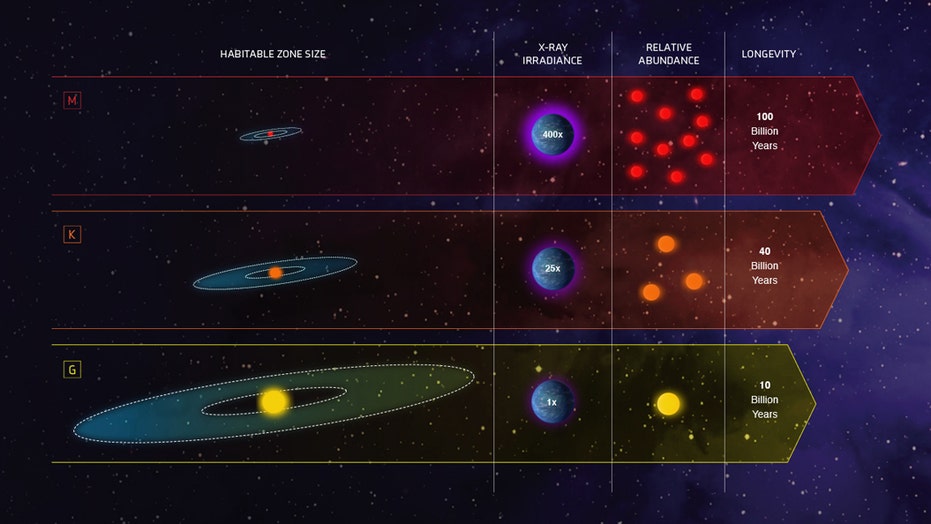 NASA is committed to finding life in the universe and new evidence shows that they might be best suited looking at "Goldilocks stars" instead of stars known as red dwarfs.

Orange dwarfs, also known as "Goldilocks stars" or K-stars, are more stable than red dwarfs, send out far fewer X-rays and other damaging radiation to their surrounding exoplanets and are three times as abundant, adding justification for researchers to consider these types of stars.

"This opens up a vast timescape for biological evolution to pursue an infinity of experiments for yielding robust life forms," NASA researchers wrote in a statement. "And, for every star like our Sun there are three times as many orange dwarfs in the Milky Way."

This infographic compares the characteristics of three classes of stars in our galaxy: Sunlike stars are classified as G stars; stars less massive and cooler than our Sun are K dwarfs, and even fainter and cooler stars are the reddish M dwarfs. (Credit: NASA, ESA, and Z. Levy (STScI)

The study was presented earlier this month at the 235th meeting of the American Astronomical Society in Honolulu and uses nearly three decades worth of research for its findings.

Orange dwarfs, or K stars, are dimmer than the sun, which allows researchers to see the exoplanets easier as they orbit the stars. Unlike red dwarfs, they also live longer and remain stable longer, between 15 and 45 billion years.

"K-dwarf stars are in the 'sweet spot,' with properties intermediate between the rarer, more luminous, but shorter-lived solar-type stars (G stars) and the more numerous red dwarf stars (M stars)," Villanova University researcher Edward Guinan said in the statement. "The K stars, especially the warmer ones, have the best of all worlds. If you are looking for planets with habitability, the abundance of K stars pump up your chances of finding life."

The sun, known as a G star, is approximately 4.5 billion years old and is expected to burn for about 10 billion years, according to NASA.

Guinan and another Villanova astronomer, Scott Engle, are looking at potentially habitable exoplanets that orbit orange dwarf stars, such as Kepler-442, Tau Ceti and Epsilon Eridani, to learn more about them.

Tau Ceti and Epsilon Eridani were first targeted in the 1950s as part of Project Ozma, described as the "first attempt to detect radio transmissions from extraterrestrial civilizations."

NASA's Transiting Exoplanet Survey Satellite (TESS) took over for the Kepler Telescope in the search for exoplanets. Since its launch in April 2018, it has made a number of discoveries, including its first Earth-sized planet in a star's "habitable zone," discovered earlier this year.

Although TESS has discovered several exoplanets that could support life, it is unable to look for atmospheric or other signs of life. That job will be given to the James Webb Telescope, the next-generation successor to the Hubble Space Telescope, set for launch in March 2021.