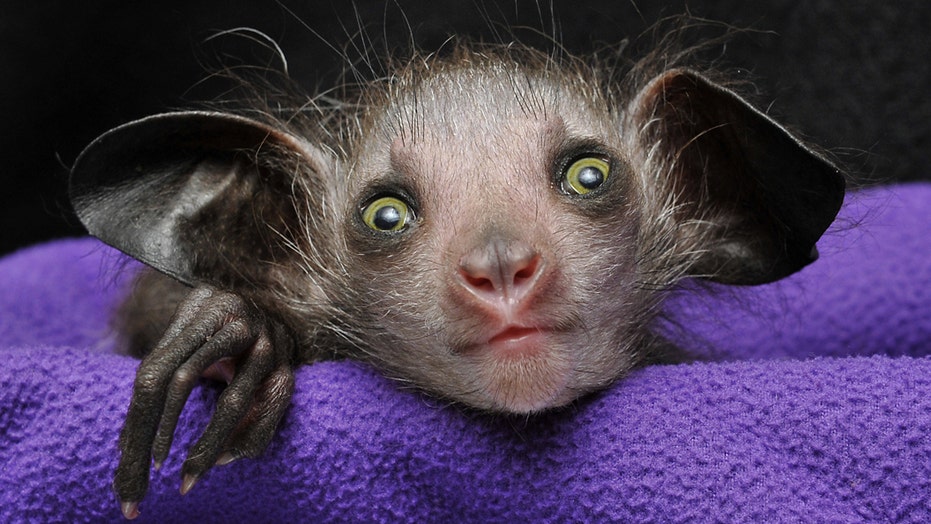 The aye-aye, also known as a long-fingered lemur, gets a bad rap for its strange appearance. But a new study has revealed the nocturnal mammal has one feature that has surprised researchers  — the first "pseudothumb" ever found in a primate.

The newly published research notes that aye-ayes, native to Madagascar, have a tiny structure comprised of bone and cartilage. It also has muscles around it "that allows it to move in three directions - much the same way that human thumbs move," according to a statement accompanying the study.

"The aye-aye has the craziest hand of any primate," said the study's lead author, Adam Hartstone-Rose, in a statement. "Their fingers have evolved to be extremely specialized - so specialized, in fact, that they aren't much help when it comes to moving through trees. When you watch them move, it looks like a strange lemur walking on spiders."

This is a digital rendering of pseudothumb. (Credit: Edwin Dickinson, NC State University)

Although it may be nub-like in appearance, it definitely serves a function, Hartstone-Rose added.

"The pseudothumb is definitely more than just a nub," Hartstone-Rose said. "It has both a bone and cartilaginous extension and three distinct muscles that move it. The pseudothumb can wriggle in space and exert an amount of force equivalent to almost half the aye-aye's body weight. So it would be quite useful for gripping."

The rare black aye-aye named Melisandre resembles a bat with its pointed ears, long bony fingers and eyes which glow in the dark. (Credit: SWNS)

Aye-ayes have bony fingers, one of them being exceptionally long, which Hartstone-Rose believes may be the cause of this evolutionary change.

"Other species, like the panda bear, have developed the same extra digit to aid in gripping because the standard bear paw is too generalized to allow the dexterity necessary for grasping," he added. "And moles and some extinct swimming reptiles have added extra digits to widen the hand for more efficient digging or swimming. In this case, the aye-aye's hand is so specialized for foraging, an extra digit for mobility became necessary."

"Some other primate species have reduced digits to aid in locomotion," Hartstone-Rose continued. "The aye-aye is the first primate to dial digits up in the hand rather than dial them down. And it's amazing that it's been there the whole time, in this strangest of all primates, but no one has noticed it until now."

The research was published in the American Journal of Physical Anthropology.

In Madagascar, aye-ayes are considered symbolic of death and are even considered an omen of evil. The aye-aye was thought to be extinct but was rediscovered in 1961, according to the World Wildlife Fund.

Earlier this month, a baby aye-aye known as Melisandre was born at the Duke Lemur Center in North Carolina. The gentle creature weighed just 81 grams at birth and is one of only nine at the DLC and 25 in the entire country.

In 2018, a baby aye-aye named Tonks was born at the Denver Zoo to parents Bellatrix and Smeagol.