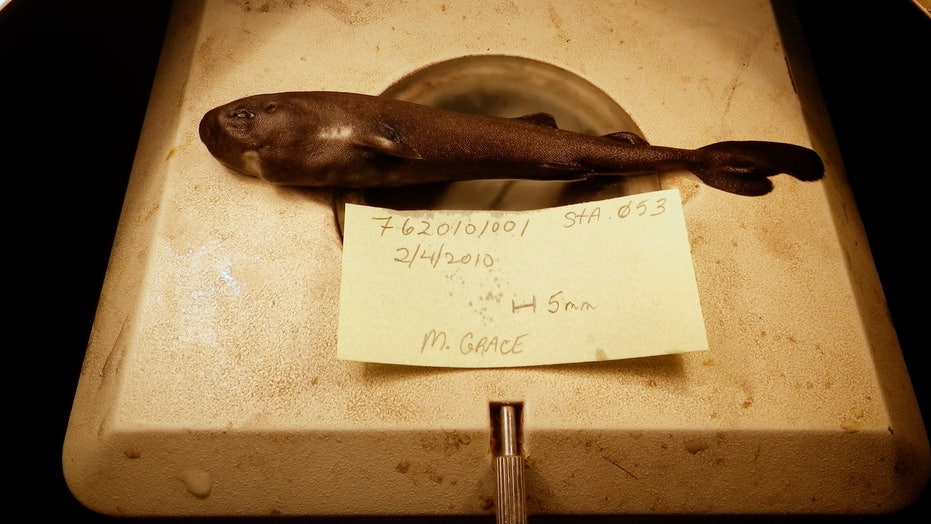 A tiny shark discovered in the Gulf of Mexico with mysterious pouches near its front fins has turned out to be a new species, scientists say.

The fittingly named American pocket shark, or Mollisquama mississippiensis, uses the pouches to squirt little glowing clouds into the ocean. It's only the third shark species out of more than 500 that may squirt luminous liquid, according to R. Dean Grubbs, a Florida State University scientist who was not involved in the research. The other two are the previously known pocket shark and the taillight shark, which has a similar gland near its tail.

"You have this tiny little bulbous luminescent shark cruising around in the world’s oceans and we know nothing about them," Grubbs told The Associated Press. "It shows us how little we actually know."

The new shark was discovered by Mark Grace, an ichthyologist at the National Oceanic and Atmospheric Administration (NOAA). He collected a baby of the species during a 2010 survey to find out what Gulf of Mexico sperm whales eat by trawling in an area and at a depth where tagged whales had been feeding.

He told AP the American pocket shark was in the last specimen bag he opened about three years later.

"I’ve been in science about 40 years," he said. "I can usually make a pretty good guess. I couldn’t with this one. I figured I was doing something wrong.”

The only other pocket shark known to science is a 16-inch adult female found in the Pacific Ocean off Peru. By comparison, the American pocket shark discovered by Grace was a newborn male measuring 5.6 inches long.

WILLIAM MCKEEVER: SHARKS AREN'T QUITE THE THREAT THAT 'JAWS' PORTRAYED

The muscular glands are lined with pigment-covered fluorescent projections, indicating they squirt luminous liquid, Grace and his collaborators wrote in the journal "Zootaxa." The shark also has clusters of light-emitting cells dotted on its belly.

A 2015 paper identified the shark as the second of its kind. It took years more, including high-resolution scans in the particle accelerator in Grenoble, France, to get more internal detail, to be sure it was a new species. Another European expert, Julien Claes, did cellular dissection of a bit of the pocket tissue to confirm its function.

"The collaborations were exciting," Grace said.

“I don’t get over it,” he added. “I just remind myself this is one of the great parts of science, to have collaborations like that.”