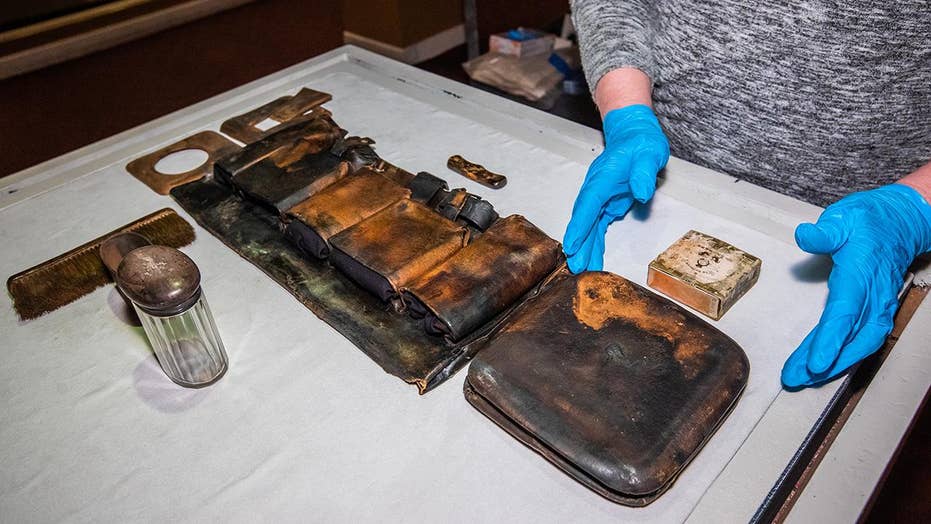 For the first time since opening its doors 10 years ago, the Titanic: The Artifact Exhibition in Las Vegas has unveiled never-before-seen artifacts from the historic shipwreck.

LAS VEGAS – It’s been more than a century since the Titanic struck an iceberg and sank to the bottom of the Atlantic Ocean – but despite the decades that have passed since 1912, the memory and legacy of the “unsinkable ship” continue to mesmerize historians and enthusiasts.

For the first time since opening its doors 10 years ago, the "Titanic: The Artifact Exhibition" in Las Vegas has unveiled never-before-seen artifacts that help paint the picture of the historic shipwreck.

WILL TITANIC'S SUNKEN WRECK BE PROTECTED BY NEW TREATY? TREASURE HUNTERS ARE SKEPTICAL

Some of the artifacts include an hourglass, a pair of old leather boots, a case with test tubes and a cosmetics jar with cream, among other items.

“The last time we recovered artifacts was in 2004,” Klingelhofer told Fox News. “When we recover artifacts, we're the stewards forever. So that means we have to treat them initially and each type of material takes a long time to treat -- we select those things that we think would be compelling to the current audience. But, we never stop conserving things. We never stop researching them.”

The luxury British steamship was carrying 2,223 passengers when it set sail on its maiden voyage from Southampton, England – making stops in France and Ireland before heading for New York.

On April 15, 1912, the Titanic struck an iceberg off the coast of Newfoundland, and 1,517 people died and 706 others were rescued, according to the U.S. Senate Report on the incident.

“A key element of the Titanic and why it resonates so much with people is because of the idea that this was the unsinkable ship. This was a technological wonder that was going to change the way that humans dealt with the environment,” Deirdre Clemente, University of Nevada, Las Vegas public history professor told Fox News. “But as we learned from that and of course, we're learning in many other different kinds of ways about technology today is that it can create as many problems as we think it solves and humans are still vulnerable to the elements as much now as we were then.”

The exhibition inside the Luxor is the largest Titanic museum in the country and takes visitors on an emotional journey – connecting people to the ship and its passengers through the artifacts that helped identify those on the ill-fated voyage.

“It's an empathetic experience because you are going through their lives,” Klingelhofer said. “It teaches you about people, about social norms, many different things you can learn along the way.”

While the ship continues to rest at the bottom of the Atlantic Ocean, Mother Nature continues to take its course – closing the window for researchers to explore and gather more data from the wreckage.

“There is a steady decrease of the viability of the ship itself and therefore of the artifacts themselves as well -- the artifacts are strewn in the debris field,” Klingelhofer explained. “But yes, the rusticles are working hard to return the steel back to nature. I mean it's manmade, it wants to go back to being iron ore.”

Never-before-seen artifacts are on display for the first time at the Titanic: The Artifact Exhibition in las Vegas. (Experiential Media Group)

Klingelhofer told Fox News RMS Titanic Inc. has filed with a judge for an expedition to the Titanic sometime in 2020 in hopes of learning more about the deterioration, as well as additional research on artifacts and marine life.

Remains of the Titanic are protected from people diving for valuables thanks to a treaty between the United States and the United Kingdom that was ratified last month by Secretary of State Mike Pompeo.