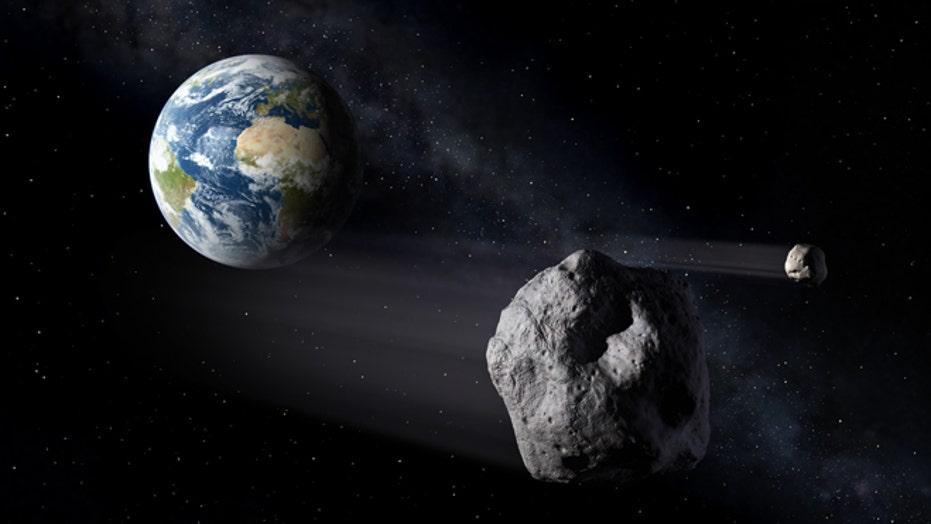 Although Earth only has one moon, it does have other natural satellites, including asteroid 2016 HO3, known as a "co-orbital object." These tiny celestial objects could be an "attractive location for extraterrestrial intelligence," according to a new study.

The research suggests that these space rocks could be hiding grounds for an advanced civilization, given their small size and close proximity to the planet.

"These near-Earth objects provide an ideal way to watch our world from a secure natural object," the study's abstract reads. "That provides resources an ETI [extraterrestrial intelligence] might need: materials, a firm anchor, and concealment. These have been little studied by astronomy and not at all by the Search for Extraterrestrial Intelligence (SETI) or planetary radar observations."

An artist's illustration of asteroids, or near-Earth objects. (ESA - P.Carril)

The study's sole author, James Benford, told Live Science that it's possible that there could be hundreds, or even thousands, of stars that have been close enough to the Earth throughout its history for a potential intelligent civilization to make contact.

The two closest stars to Earth are Alpha Centauri A and Alpha Centauri B, which are approximately 4.3 light-years from Earth. A light-year, which measures distance in space, equals 6 trillion miles.

They may have seen simple life, single-celled organisms or possibly dinosaurs, depending upon when and if they viewed them. He added that there's a chance any of the technology they used to keep tabs on Earth could still be there. "This is essentially extraterrestrial archaeology I'm talking about," Benford told the news outlet.

Discovered in 2016, asteroid 2016 HO3 keeps an orbit around the Sun that allows it to remain a "constant companion of Earth," NASA's JPL previously explained. China is planning to explore the near-Earth asteroid as well as a main asteroid belt comet, known as 133P, according to the country's state-run Xinhua news agency.

Paul Davies, a physicist and astrobiologist at Arizona State University who was not involved in the study, told Live Science that even if there is no evidence of an extraterrestrial civilization found, studying co-orbitals might yield some promising finds.

"How likely is it that alien probe would be on one of these co-orbitals, obviously extremely unlikely," Davies told the news outlet. "But if it costs very little to go take a look, why not? Even if we don't find E.T., we might find something of interest."

The research has been published in the Astronomical Journal.

Earlier this month, a separate study suggested that the Milky Way galaxy could be filled with alien civilizations, but they have not visited the Earth in millions of years.