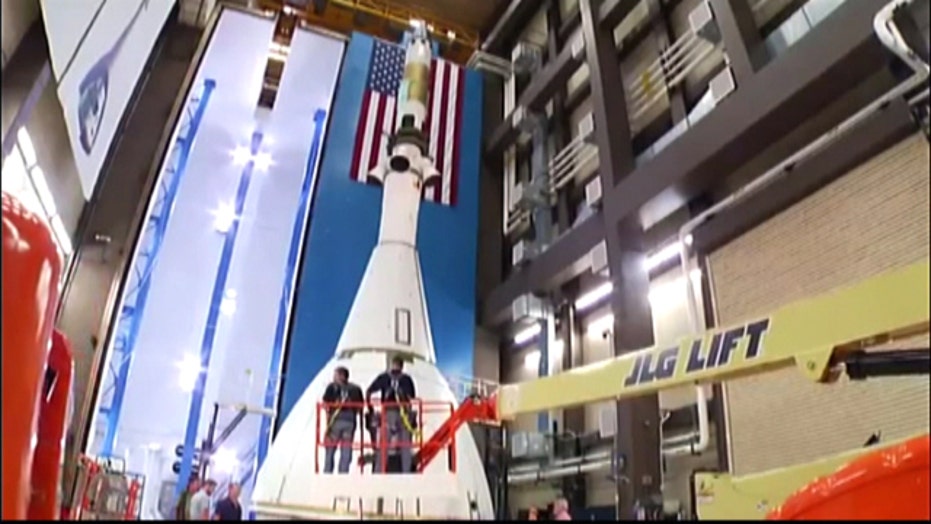 Christopher Nolan’s epic movie “Interstellar” is set to open next week…but already NASA’s Orion spacecraft is well on its way to making this sort of space exploration beyond the Moon a reality.

In the movie, a group of explorers break through current limitations on human space travel and traverse vast distances in space.

In real life, Orion is NASA’s first spacecraft designed to carry humans on missions of long duration in deep space exploration. Orion will take humans to interplanetary destinations beyond low Earth orbit and return them safely back home.

Orion could make exploring asteroids, the moon’s hidden far side, Mars, and other destinations throughout the solar system a possibility for mankind.

The state-of-the-art Orion spacecraft will carry a crew of up to six astronauts.

It could someday prove essential to humans expanding their presence beyond Earth.

Orion is designed to meet the requirements of lunar and asteroid missions. Innovative solutions to space challenges, which are also designed to keep the crew safe will also be built into the spacecraft.

In terms of radiation protection, Orion’s cutting-edge heat shield will protect crew members from the likes of solar flares and cosmic rays. So far, the shield can provide protection to astronauts for missions of six to seven months.

Orion will be able to withstand mega speeds greater than 20,000-miles per hour during re-entry into Earth’s atmosphere – much higher speeds than vehicles designed to only reach the International Space Station.

If a problem arises, the crew on the long-distance missions will not be able to return to Earth quickly, so the Orion spacecraft is designed with crucial safety features. Astronauts, for example, will be able to safely abort throughout all mission phases.

Asteroids as stepping stones to Mars

Over the past decade, astronomers have discovered lots of asteroids in Earth-like orbits and continue to discover more.

Traditionally, reaching asteroids was considered extremely challenging – more so even than getting to the Moon and Mars.

In spite of being many times farther than the Moon, some of these new asteroids are accessible with spacecraft like Orion.

A mission to an asteroid could take astronauts several million miles from Earth, lasting about six months.

One Orion will not be large enough for an asteroid mission – but two will be.

By combining two Orions for this mission, there will be just enough propellant, supplies, and living space to reach the most accessible asteroids. And should something go wrong with one spacecraft, then the astronauts will have a back-up.

So what sort of asteroids will astronauts visit?

Approximately half a million main belt asteroids, like Ceres, orbit far beyond Mars and are not yet accessible for human missions.

There are about 7,000 near-earth asteroids like Eros that approach Earth, but they travel at such high speeds they are currently still too difficult to reach.

However a small number of these near-earth asteroids, like 2008 EA9, are close-by and in Earth- like orbits. They also have a similar velocity to Earth, making round trip visits possible.

Why are asteroid missions important?

Asteroid missions could act as crucial stepping stones to deeper space exploration – intermediate steps between the Moon and Mars.

Before embarking on a multiple-year trip all the way to Mars, trips to asteroids will give teams practice for longer deep space missions. Astronauts will deal with similar conditions, such as ‘no rescue’ and ‘no resupply,’ as well as other challenges like radiation risk and speed of light lag.

It is also important in terms of planetary defense. Investigating asteroids will help us understand which ones are threats and learn how to deflect an asteroid on a collision course with Earth.

Small asteroids are mostly no big deal, but some can be large enough to cause events such Tungaska – the massive explosion in Russia in 1908 that was likely caused by an asteroid or comet.

Bringing samples back to Earth will also help us understand the origin and history of planets and our solar system. And studying the asteroids firsthand may help us use them for harvestable resources to sustain human expansion into space.

Orion will also decisively re-establish the United States as a key player in space.

On Dec. 4, 2014, there will be a test of the fundamental components to a deep space mission and re-entry before Orion’s first human flight.

An Exploration Flight Test-1 will launch an Orion atop a Delta IV Heavy launch vehicle at Cape Canaveral Air Force Base.

The spacecraft will travel about 3,600 miles above the Earth’s surface and then it will return to Earth in a high speed re-entry.

In 2017, Orion will deploy on an exploration mission for the first time. This mission could involve a 6-day journey to almost 250,000 miles from Earth.