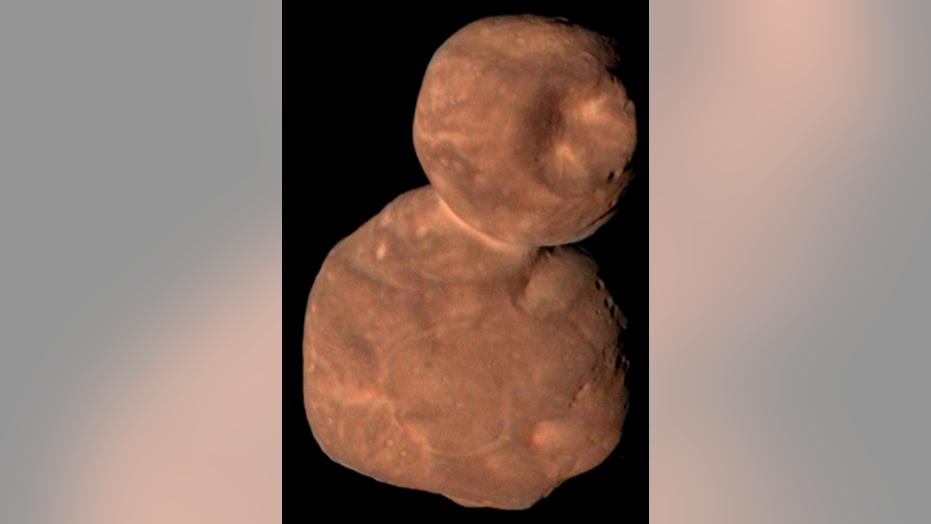 The mission is also boosting scientific knowledge about the formation of planetesimals, described by NASA as “the building blocks of the planets.”

In a statement, the space agency explained that on Jan. 1, 2019 the New Horizons spacecraft flew past an object in the Kuiper Belt, dubbed Arrokoth or 2014 MU69. The flyby, which took place more than 4 billion miles from Earth, provided a wealth of detailed data on Arrokoth’s shape, geology, color and composition, according to NASA.

“Arrokoth is the most distant, most primitive and most pristine object ever explored by spacecraft, so we knew it would have a unique story to tell,” said New Horizons principal investigator Alan Stern, of the Southwest Research Institute in Boulder, Colo., in the statement. “It’s teaching us how planetesimals formed, and we believe the result marks a significant advance in understanding overall planetesimal and planet formation.”

Images from the spacecraft’s flyby show that Arrokoth has two connected lobes, a smooth surface and a uniform composition. By studying data provided by New Horizons, scientists have worked out that the lobes “were once separate bodies that formed close together and at low velocity, orbited each other, and then gently merged to create the 22-mile long object New Horizons observed,” NASA says.

“This indicates Arrokoth formed during the gravity-driven collapse of a cloud of solid particles in the primordial solar nebula, rather than by the competing theory of planetesimal formation called hierarchical accretion,” the space agency explained. “Unlike the high-speed collisions between planetesimals in hierarchical accretion, in particle-cloud collapse, particles merge gently, slowly growing larger.”

Scientists have presented their findings in three papers in the journal Science.

“Just as fossils tell us how species evolved on Earth, planetesimals tell us how planets formed in space,” said William McKinnon, a New Horizons co-investigator from Washington University in St. Louis and lead author of an Arrokoth paper in Science. “Arrokoth looks the way it does not because it formed through violent collisions, but in more of an intricate dance, in which its component objects slowly orbited each other before coming together.”

Initially (and somewhat controversially) nicknamed “Ultima Thule,” the object was officially named Arrokoth, which means “sky” in the Powhatan/Algonquian language, in a ceremony on Nov. 19, 2019.

The New Horizons mission launched in January 2006. The spacecraft is now 4.4 billion miles from Earth.