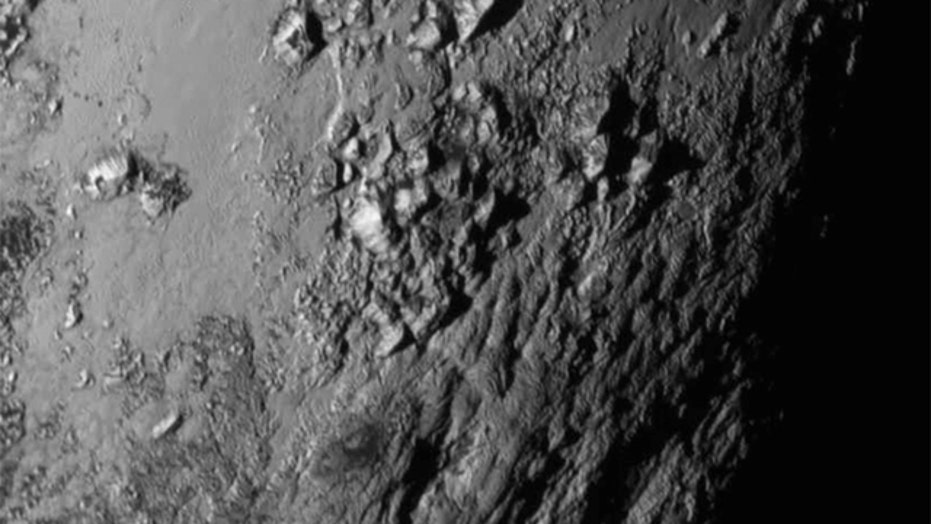 “We have got a whole bunch of high-resolution observations safely on the spacecraft,” said New Horizons’ Geology, Geophysics and Imaging Team Leader John Spencer, during a press conference at Johns Hopkins University's Applied Physics Laboratory in Laurel, Maryland, which is managing the mission. “We’re now focusing on small details on this amazing world.”

NASA released its first closeup image of an area near Pluto’s equator Wednesday, which contains a range of mountains rising as high as 11,000 feet above the dwarf planet’s icy surface.

“These mountains are quite spectacular,” said Spencer.

New Horizons principal investigator Alan Stern compared the range to the Rocky Mountains, adding that they provide clues about Pluto’s geology. “The steep topography means that the bedrock that made these mountains must be of H20, water ice,” he said. “We can be really sure that the water is there in great abundance.”

The image was taken about an hour-and-a-half before New Horizons’ closest approach to Pluto, when the craft was 478,000 miles from the planet’s surface.

NASA also released an image of Pluto’s largest moon Charon, which clearly shows a swath of cliffs and troughs stretching about 600 miles across its surface.

“Charon blew our socks off when we had this new image today,” said New Horizons Deputy Project Scientist Cathy Olkin, during the press conference. “We have just been thrilled.”

Imaging obtained by New Horizons and transmitted to Earth early Wednesday morning also sheds light on Pluto's outermost moon Hydra. Since its discovery in 2005, Hydra has been known only as a fuzzy dot of uncertain shape, size, and reflectivity, according to NASA, although New Horizons' Long Range Reconnaissance Imager (LORRI) reveals the moon's irregularly shaped body.

The spacecraft made its flyby Tuesday, passing within 7,750 miles of Pluto's surface, roughly the distance between New York and Mumbai.

Confirmation of the successful flyby came late Tuesday, when New Horizons contacted scientists back on Earth, 3 billion miles from Pluto.

Pluto has fascinated astronomers since 1930, when it was discovered by Clyde Tombaugh using the Lowell Observatory in Flagstaff, Ariz. Some of Tombaugh's ashes are aboard New Horizons.

New Horizons is the first-ever space mission to explore a world so far away from Earth, according to NASA.

The spacecraft's flyby of Pluto and its five known moons provides valuable insight into the solar system's Kuiper Belt, which contains icy objects that range in size from boulders to dwarf planets, NASA said. Kuiper Belt objects, such as Pluto, can preserve evidence about the early formation of the solar system