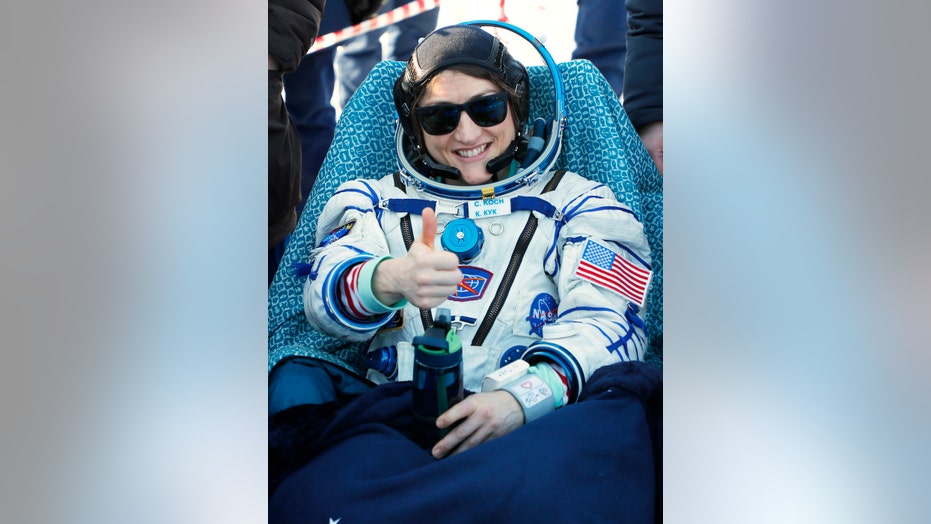 NASA astronaut Christina Koch, who was part of the first-ever all-female spacewalk in October, has returned safely to Earth after spending nearly 11 months in orbit.

Koch returned with International Space Station Commander Luca Parmitano of the European Space Agency and Russian cosmonaut Alexander Skvortsov. Her stay on the ISS set a spaceflight record for a female astronaut.

The trio touched down southeast of Dzhezkazgan, Kazakhstan, at 3:12 p.m. local time (0912 GMT) in a Soyuz capsule.

Koch, 41, spent 328 days on the International Space Station, giving researchers the opportunity to observe the effects of long-duration spaceflight on a woman. The study will have long-lasting effects since NASA has made it clear that it intends to return to the Moon with its Artemis program, which includes a female astronaut landing on the lunar surface.

The astronaut, who grew up in Jacksonville, N.C., and now lives near the Gulf of Mexico in Galveston, Texas, with her husband, Bob, told The Associated Press last month that taking part in the first all-female spacewalk was the highlight of her mission.

Koch said that she and her fellow NASA astronaut Jessica Meir appreciated that the Oct. 18 spacewalk "could serve as an inspiration for future space explorers.” Meir became the 228th person in the world to conduct a spacewalk and the 15th woman.

NASA originally wanted to conduct an all-female spacewalk in the spring of 2019 but did not have enough medium-size suits ready to go. The two women were supposed to install more new batteries in a spacewalk but had to venture out earlier than expected to deal with an equipment failure, replacing an old battery charger for one of the three new batteries that was installed by Koch and fellow NASA astronaut Andrew Morgan.

Russian officials said all three, including Parmitano and Skvortsov, who spent 201 days in space, were in good shape, following preliminary medical evaluations.