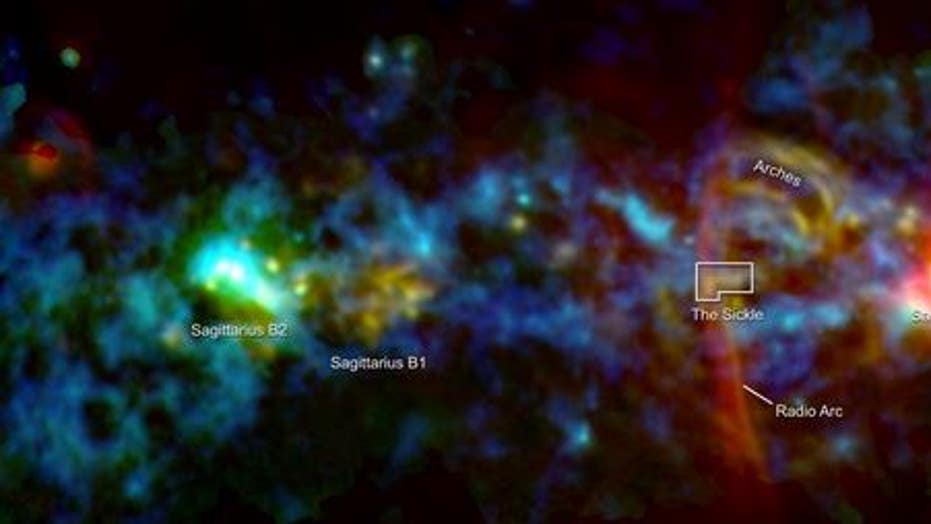 NASA spotted a feature resembling a candy cane at the center of a new colorful image of the Milky Way's central zone.

The beautiful image, which spans 190 light-years, is one of a set of long, thin strands of ionized gas called filaments. The picture depicts the inner part of our galaxy, which hosts the largest and densest collection of giant molecular clouds in the Milky Way.

These vast clouds contain enough dense gas and dust to form tens of millions of stars like the sun, the space agency said.

"It was a real surprise to see the Radio Arc in the GISMO data," Richard Arendt, a team member at the University of Maryland, Baltimore County and Goddard, said in the statement. "Its emission comes from high-speed electrons spiraling in a magnetic field, a process called synchrotron emission. Another feature GISMO sees, called the Sickle, is associated with star formation and may be the source of these high-speed electrons."

Blue and cyan features reveal cold dust in molecular clouds where star formation is still very new. Yellow features, including the filaments making up the candy cane’s handle and the Sagittarius B1 molecular cloud, reveal the presence of ionized gas and show well-developed star factories, while the red and orange regions show areas where synchrotron emission occurs.

The image was published using an instrument known as the Goddard-IRAM Superconducting 2-Millimeter Observer (GISMO), which was built at the space agency's Goddard Flight Center in Greenbelt, Maryland.