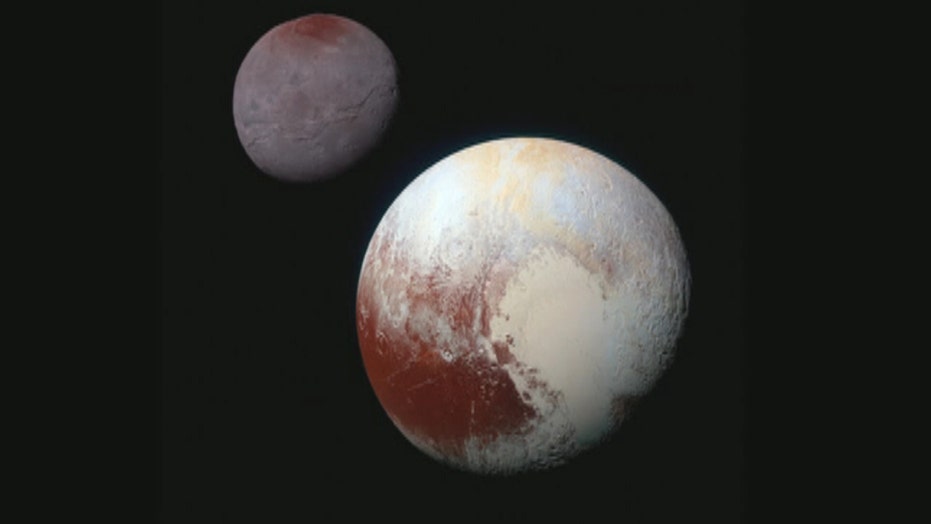 Space.com managing editor Tariq Malik explains what can be learned from historic flyby on 'America's Newsroom'

“Pluto is showing us a diversity of landforms and complexity of processes that rival anything we’ve seen in the solar system,” said New Horizons Principal Investigator Alan Stern, of the Southwest Research Institute (SwRI), in a statement released by NASA. “If an artist had painted this Pluto before our flyby, I probably would have called it over the top — but that’s what is actually there.”

This synthetic perspective view of Pluto, based on the latest high-resolution images to be downlinked from NASA’s New Horizons spacecraft, shows what you would see if you were approximately 1,100 miles above Pluto’s equatorial area. The images were taken as New Horizons flew past Pluto on July 14, 2015, from a distance of 50,000 miles. (Credits: NASA/Johns Hopkins University Applied Physics Laboratory/Southwest Research Institute)

The images, released on Thursday, show the most heavily cratered (and therefore oldest) terrain yet captured by New Horizons, as well as icy plains.

Images downlinked in recent days have more than doubled the amount of Pluto’s surface seen at resolutions up to 440 yards per pixel, according to NASA. “They reveal new features as diverse as possible dunes, nitrogen ice flows that apparently oozed out of mountainous regions onto plains, and even networks of valleys that may have been carved by material flowing over Pluto’s surface,” the agency said, in its statement. “They also show large regions that display chaotically jumbled mountains reminiscent of disrupted terrains on Jupiter’s icy moon Europa.”

Mosaic of high-resolution images of Pluto, sent back from NASA’s New Horizons spacecraft from Sept. 5 to 7, 2015. The image is dominated by the informally-named icy plain Sputnik Planum, the smooth, bright region across the center. The image was taken as New Horizons flew past Pluto on July 14, 2015, from a distance of 50,000 miles. (Credits: NASA/Johns Hopkins University Applied Physics Laboratory/Southwest Research Institute)

NASA released the first images from New Horizons’ Pluto flyby in July. The spacecraft began its yearlong download of new images and other data over the Labor Day weekend.

“The surface of Pluto is every bit as complex as that of Mars,” said Jeff Moore, leader of the New Horizons Geology, Geophysics and Imaging (GGI) team at NASA’s Ames Research Center, in the statement. “The randomly jumbled mountains might be huge blocks of hard water ice floating within a vast, denser, softer deposit of frozen nitrogen within the region informally named Sputnik Planum.”

Launched in 2006, New Horizons passed by Jupiter in 2007 on its journey to Pluto. The fastest spacecraft ever, the probe traveled at 30,000 mph on its epic trip.