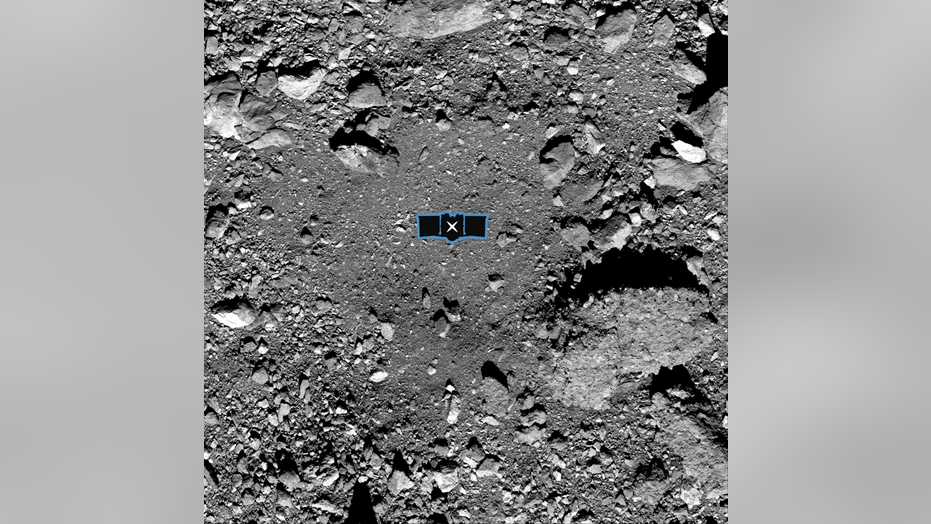 OSIRIS-REx is NASA's first mission to an asteroid to retrieve a sample and return it to Earth.

‘X’ marks the spot as NASA prepares for a historic asteroid mission.

NASA has selected the site on asteroid Bennu where its OSIRIS-REx spacecraft will retrieve a sample of space rock.

ASTEROID BENNU IS SHOOTING OUT ROCKS – AND NASA ISN'T SURE WHY

“After thoroughly evaluating all four candidate sites, we made our final decision based on which site has the greatest amount of fine-grained material and how easily the spacecraft can access that material while keeping the spacecraft safe,” said Dante Lauretta, OSIRIS-REx principal investigator at the University of Arizona in Tucson, in a statement. “Of the four candidates, site Nightingale best meets these criteria and, ultimately, best ensures mission success.”

This image released by NASA shows sample site Nightingale, OSIRIS-REx’s primary sample collection site on asteroid Bennu. The image is overlaid with a graphic of the OSIRIS-REx spacecraft to illustrate the scale of the site. (NASA/Goddard/University of Arizona)

A second site, dubbed Osprey, has been picked as a backup for sample collection.

This is a mosaic image of asteroid Bennu, from NASA’s OSIRIS-REx spacecraft. (Credits: NASA/Goddard/University of Arizona)

The spacecraft will use a robotic arm to grab the sample from Bennu.

OSIRIS-Rex will make its first “touch-and-go” sample collection attempt in August 2020. The probe will depart Bennu in 2021 and is scheduled to return to Earth in September 2023, according to NASA.