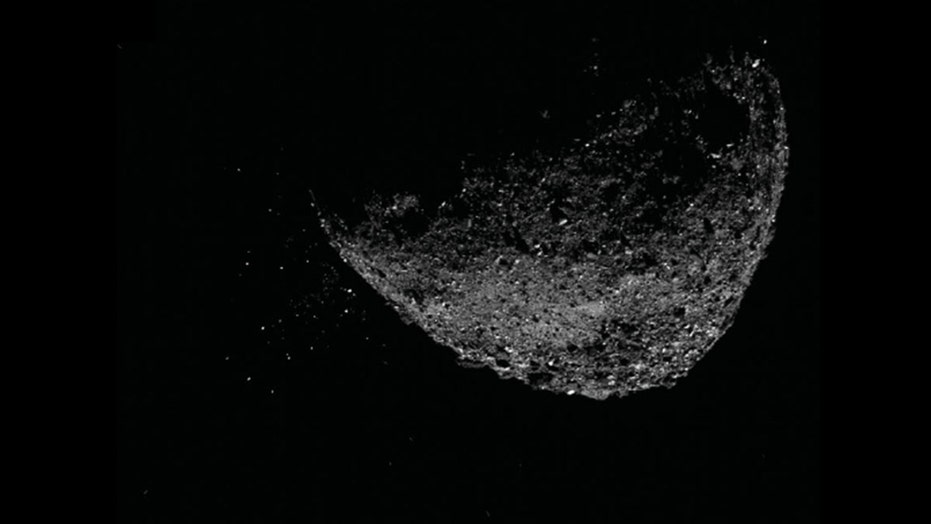 Asteroid Bennu, which could provide answers to questions about the origins of our solar system, is mysteriously launching particles into space and NASA isn't sure why.

Since reaching the massive space rock in December 2018, NASA has observed multiple particle-ejection events, including three major ones on Jan. 6, Jan. 19 and Feb. 11. The researchers found that the particles either orbited Bennu and fell back to its surface or escaped its orbit and went into space. The largest event, which took place on Jan. 6, saw "approximately 200 particles" get ejected from the asteroid, NASA wrote in a blog post.

The particles traveled as fast as 10 feet and ranged in size between less than an inch to 4 inches. The mysterious ejection could be caused by three different reasons, according to the NASA blog post: meteoroid impacts, thermal stress fracturing and released water vapor.

This view of asteroid Bennu ejecting particles from its surface on Jan. 6, 2019, was created by combining two images taken by the NavCam 1 imager aboard NASA's OSIRIS-REx spacecraft: a short exposure image, which shows the asteroid clearly, and a long-exposure image (five seconds), which shows the particles clearly. (Credit: NASA/Goddard/University of Arizona/Lockheed Martin)

Meteoroid impacts are common in "the deep space neighborhood" of Bennu, NASA added, noting it's possible these are occurring when the space agency's craft, OSIRIS-REx, is not observing it.

Thermal fracturing could also play a role because of the significant temperature changes Bennu experiences during its 4.3-hour rotation period. The surface of the asteroid "warms significantly" during the mid-afternoon, which is when NASA said the major particle-ejection events occurred, leading to the theory that the temperature causes the rocks to crack, break down and ultimately get ejected.

In December 2018, NASA discovered there was water inside its clay, which could also cause the particles to eject as the water is heated and pressure builds.

The particle ejections could also be a combination of all three methods, Steve Chesley, the study's lead author pointed out. "It could be that more than one of these possible mechanisms are at play," Chesley said in the blog post. "For example, thermal fracturing could be chopping the surface material into small pieces, making it far easier for meteoroid impacts to launch pebbles into space."

NASA posted a video to its YouTube page, adding further detail on the particle ejection.

APOCALYPTIC ASTEROID STRIKE THAT COULD WIPE OUT HUMANITY IS 'ONLY A MATTER OF TIME,' TOP SCIENTIST WARNS

"Among Bennu's many surprises, the particle ejections sparked our curiosity, and we've spent the last several months investigating this mystery," said Dante Lauretta, OSIRIS-REx principal investigator at the University of Arizona in Tucson. "This is a great opportunity to expand our knowledge of how asteroids behave."

OSIRIS-REx, which stands for Origins, Spectral Interpretation, Resource Identification, Security-Regolith Explorer, launched in September 2016 from Cape Canaveral Air Force Station. It carries five data-taking instruments and is intended to return with samples from the asteroid in September 2023.