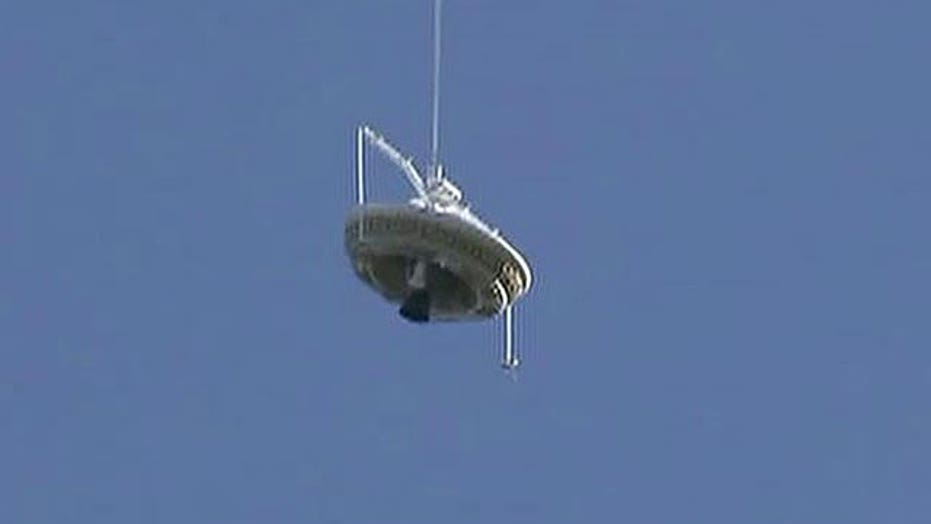 After a series of weather-related delays, NASA launched the test flight of its revolutionary 'flying saucer' technology Monday. However, only one of the two technologies designed to slow its descent to earth fully deployed.

The saucer is part of NASA’s Low-Density Supersonic Decelerator (LDSD) project, which aims to develop landing vehicles for future missions to Mars.

After reaching a height of 180,000 feet at Mach 4 a doughnut-shaped airbag, called a Supersonic Inflatable Aerodynamic Decelerator (SIAD) successfully inflated around the saucer for its descent to earth.  A huge parachute, however, only partially opened, according to NASA.

The parachute shred on deployment, Space.com reports, in what NASA engineers described as "partial chute."

This was the second flight test for the flying saucer technology. Last year an LDSD test in Hawaii was deemed a success by engineers, despite the vehicle’s huge parachute apparently failing to deploy properly, according to Space.com.

In a subsequent tweet Monday, NASA said that the vehicle would be recovered and analyzed after its "controlled water impact landing" in the Pacific Ocean.

The high altitude test at the U.S. Navy Pacific Missile Range Facility in Kauai, Hawaii, began at 1:45 p.m. ET with a huge balloon carrying the 15-foot wide, 7,000-pound test flying saucer to high altitude. The balloon, roughly the size of three football fields, lifted the flying saucer to 120,000 feet. The vehicle was then released and a booster rocket transported the saucer at Mach 4 to a height of 180,000 feet.

In an interview last week, Steve Jurczyk, NASA space technology mission directorate associate administrator told FoxNews.com that taking the saucer to an altitude of 180,000 provides a crucial test ahead of future missions to Mars. “We go to that high altitude because it simulates the atmospheric conditions on Mars,” he said. “Mars has a very thin atmosphere."

With current space technologies, NASA can land about 1 metric tonne, or 2,200 pounds on the surface of Mars, roughly equivalent to the Curiosity Rover’s weight.

The saucer underwent a “spin test” on a table at NASA’s Jet Propulsion Laboratory in Pasadena, Calif. on March 31.