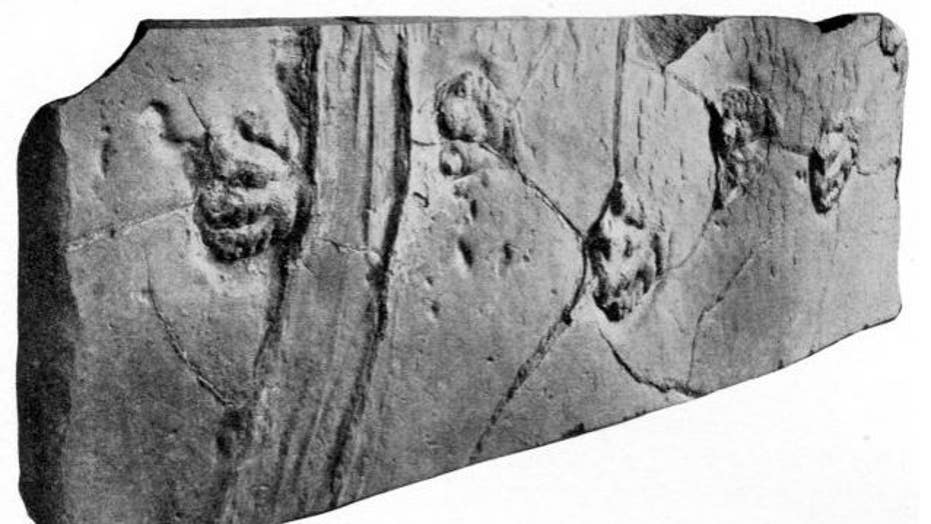 A sandstone slab containing dinosaur footprints might also contain the track of a sailing stone, scientists announced this week.

The slab, which has been on display since 1896, contains the footprints of a Brontosaurus predecessor that lived during the Early Jurassic period, according to scientists.

However, the sailing stone was not discovered until 2017 by paleontologist Paul Olsen from the Lamont-Doherty Earth Observatory at Columbia University and his colleagues.

Sailing stones are rocks or boulders that move across landscapes without assistance from gravity, people, or animals. They usually leave tracks as they go.

MILKY WAY IS AS MASSIVE AS 890 BILLION SUNS

This slab of sandstone has been on display since 1896, showing off the scaly footprints of a prosauropod dinosaur. Scientists only recently realized that the deep grooves on the left may be the track of a sailing stone. (Lull, R.S., 1915)

Olsen and his colleagues believe the trail of the rock could be evidence of a brief freezing event in the tropics some 200 million years ago — the first proof that volcanic winters reached into the humid tropics during the dawn of the dinosaur age.

According to a statement from the university, he and his colleagues believe the sandstone was deposited during the last of a series of eruptions that led to a mass extinction.

“This may be evidence of the cooling caused by the volcanic winter,” says Olsen.