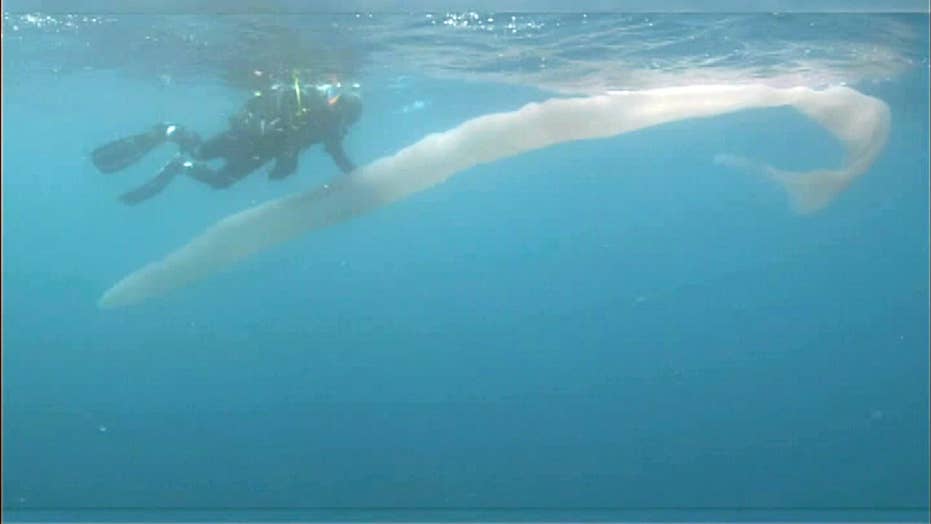 Two divers discovered a 26-foot-long ‘worm’ off the coast of New Zealand. The massive structure is actually hundreds of thousands of organisms connected together to form a Pyrosome.

Caters reports that the hollow, wind-sock-like creature was found by friends Steve Hathaway and Andrew Buttle, who were diving off the coast of Whakaari, a stratovolcano on New Zealand’s White Island.

In the video, the pulsating and shuddering worm can be seen changing shape as it moves slowly through the water. The strange creature has been identified as a Pyrosome, a bioluminescent mass made up of hundreds of thousands of organisms that feed on plankton.

Pyrosomes are actually colonies made up of individual pyrosome clones that can grow up to 60 feet in length, according to LiveScience.

“Pyrosome colonies are shaped like long bells, open at one end,” LiveScience says. “The open end, through which the colony expels its filtered water, can be as large as 6 feet (1.8 m) in diameter — large enough for a human to fit inside it.”

The elusive organisms are sometimes referred to as the unicorns of the sea.

The ocean continues to reveal its secrets. Scientists, for example, recently discovered 3 strange new sea creatures deep in the Pacific Ocean. Last year, a gruesome, fanged ‘demon fish’ sparked mystery when it washed up on a Texas beach.

Images of the creature quickly went viral, and it was identified as likely a fangtooth snake-eel or tusky eel.