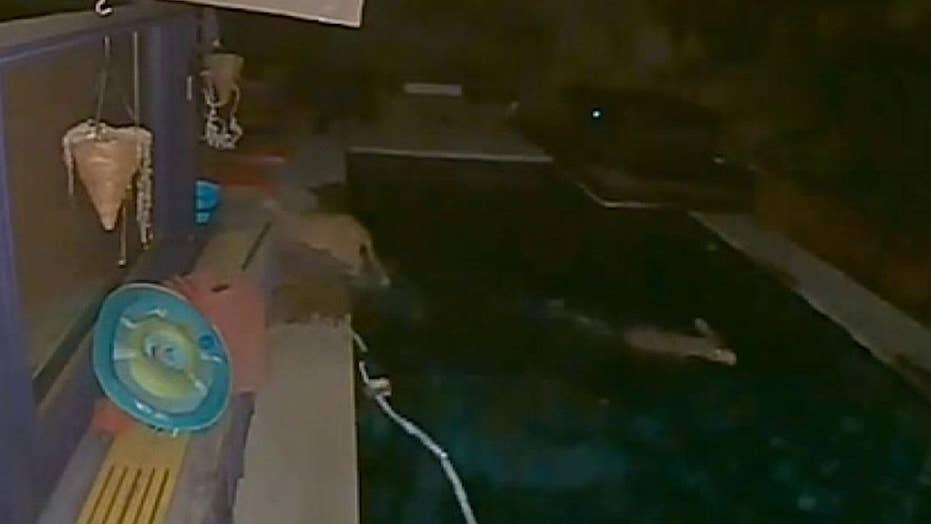 A mountain lion made quite a splash as it chased its prey straight into a California family's backyard pool last week.

But it's unclear if the big cat went home hungry.

Glendale residents Rachel Wong and her husband said they knew instantly something wild happened in their backyard when they woke up and looked outside Thursday morning. The pair decided to review their home surveillance tape to get a clue at what exactly went down — and that's when they spotted the encounter between the mountain lion and deer.

The video shows the mountain lion leaping toward the fleeing deer and landing in the middle of the family's underground pool. The mountain lion quickly exits the water as the deer swims around for a few more seconds before escaping from the opposite side of the pool.

“It was pretty scary, kind of creepy."

Another camera on the side of the family's home spotted the mountain lion again chasing the deer as it exits the water and makes a dash for the nearby woods.

“It did seem like he waited. Like there was one of the chase lounges in the backyard, [it] was quite wet, so it seemed like he hung out and waited for the deer to get out of the pool,” Wong described to KCAL.

Wildlife officials remind those who live in a state where mountain lion populations are found to remain vigilant and keep pets close.