Mount Etna, Europe's most active volcano, spews lava as the Sicilian town of Riposto, Italy, is visible in foreground, during an eruption in the early hours of Tuesday, April 11, 2017 (AP)

Mount Etna - Europe's tallest active volcano - is sliding toward the sea which could have "devastating consequences", scientists have warned.

A team of British experts has discovered the giant volcano on the east coast of the island Sicily, Italy, is edging closer to the Mediterranean Sea by 0.6 inches every year which could result in collapse.

Etna is one of the most active volcanoes in the world and is in an almost constant state of activity with a history of violent eruptions.

Open University geologist Dr. John Murray has spent nearly 50 years studying the volcano and believes this is the first sliding of this magnitude to be recorded.

He and his team of scientists have reported their astonishing findings in The Bulletin of Volcanology. Their research used GPS measurements over 11 years between 2001 and 2012. 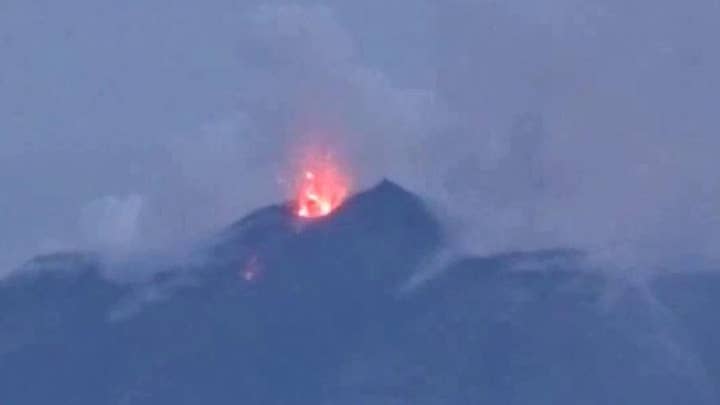 Writing in the report Dr Murray and his team said this "strong geological evidence" of sliding have a natural tendency to result in "large catastrophic sector collapse" and "devastating consequences" such as landslides.

Dr Murray told the BBC: "I would say there is currently no cause for alarm, but it is something we need to keep an eye on, especially to see if there is an acceleration in this motion."

The data suggests the mountain is moving in an east-south-east direction, down a gentle slope of 1-3 degrees towards the coastal town of Giarre, which is about 9.3 miles away.

The movement has been put down to underlying platform of weak, pliable sediments.