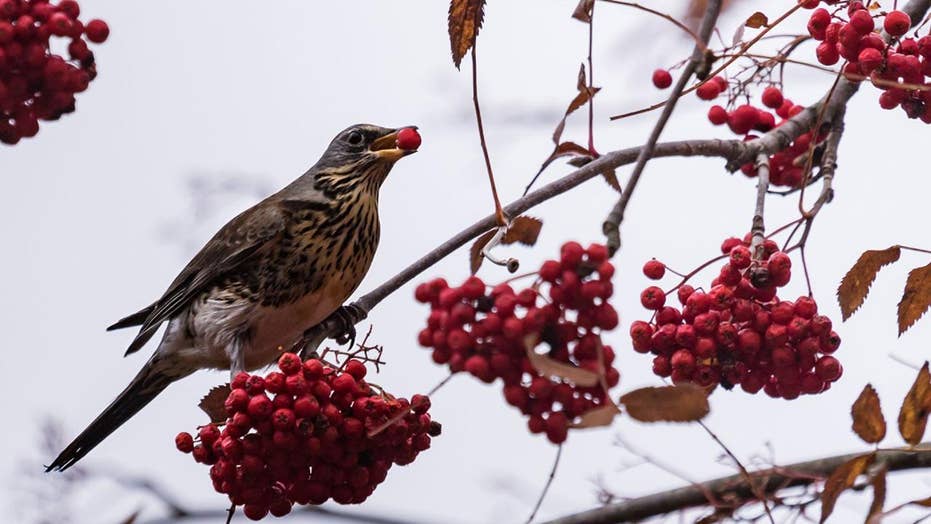 ‘Drunk birds’ in Minnesota fly into cars and windows

Officials in Gilbert, Minnesota warned of ‘drunk birds’ flying into windows and cars. The birds are ‘drunk’ from eating berries that have fermented sooner than usual this year.

The Gilbert Minnesota Police Department announced this week officials have received several reports of “drunk” birds in the community, which have been intoxicated by "certain berries" that have fermented sooner than usual this season, the police department wrote in a public notice on Tuesday.

DOZENS OF DRUNK SEAGULLS FOUND ON BEACHES IN SOUTHERN ENGLAND

An early frost has “expedited the fermenting process,” officials said. “Many birds have not migrated south, so it appears to be more prevalent than in past years. It appears that some birds are getting a little more ‘tipsy.’”

Younger birds, specifically, have a harder time handling their alcohol. According to the Gilbert Minnesota Police Department, the younger the bird, the less efficiently their liver can handle the “toxins” from the fermented berries, officials said.

Some species of birds — such as robins, cedar waxwings and thrushes — are more likely than others to become intoxicated from fermented berries, according to The Washington Post. These birds prefer berries over insects and typically overindulge on the former before flying south for the winter.

"However, every now and then, some birds just overdo it."

Inebriated birds have also been known to communicate differently, according to Smithsonian Magazine. Researchers with the Oregon Health and Science University found alcohol can slur birds’ “speech,” much like in humans.

"Most birds likely just get a bit tipsy, and very few people would be able to pick them out as intoxicated," Meghan Larivee, a laboratory coordinator at Environment Yukon, a Canadian government agency, told National Geographic in 2014. "However, every now and then, some birds just overdo it."

That said, overeating berries can be deadly for birds. At least 50 cedar waxwings birds in Texas died after eating fermented berries from an Ilex shrub plant, The National Audubon Society, an environmental organization, reported in 2011. The amount of ethanol found in the berries was “enough to produce intoxication in these birds that could have resulted in compromised behavior and subsequent fatal trauma,” the National Wildlife Health Center found.

As for the birds wreaking havoc in the Minnesota town, “they should sober up within a short period of time,” the police department said, joking residents shouldn’t call authorities about the birds unless they see “Woodstock pushing Snoopy off of the doghouse for no apparent reason,” if “Big Bird [is] operating a motor vehicle in an unsafe manner,” or residents see “Angry Birds laughing and giggling uncontrollably and appearing to be happy.”