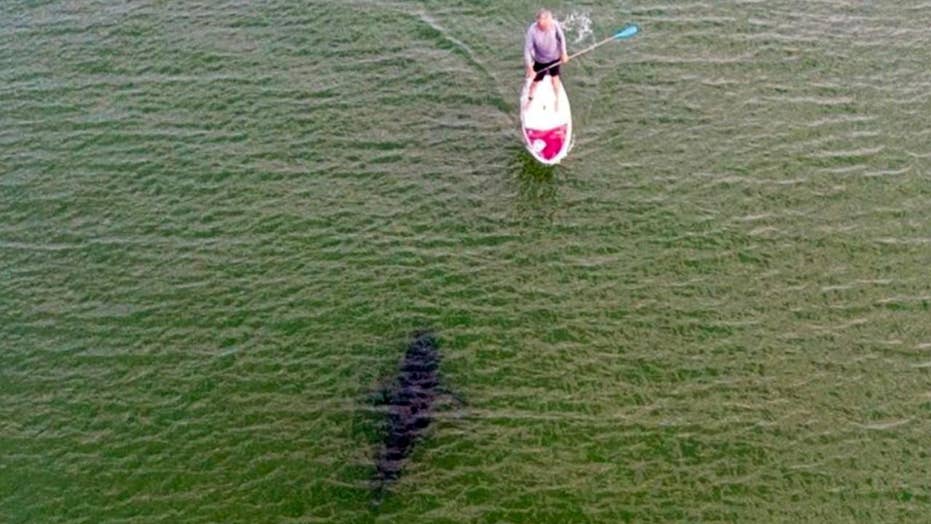 A drone operator captured a stunning image of a paddle boarder and a great white shark swimming just feet away.

Terrifying images show a great white shark swimming just feet away from a paddle boarder off a Cape Cod beach.

A drone was used to capture the chilling moment when the ocean predator swims near the paddle boarder, who remains oblivious to its presence.

“'Close encounter of a peaceful kind' - Yesterday morning Cody DeGroff captured these amazing photos of a white shark near a SUP just north of Nauset public beach. The paddle boarder did not see the shark,” explained the Atlantic White Shark Conservancy, in a Facebook post on Monday. The post has been shared more than 1,500 times.

Sharks are in the spotlight at the moment. Last month two children were bitten by sharks off Atlantique Beach and Sailors Haven in Long Island.

On Sunday a six-foot great white shark was caught off Misquamicut Beach in Rhode Island.

In response to a tweet from the Atlantic White Shark Conservancy on Sunday’s sighting, Massachusetts shark researchers tweeted that a similar incident involving a shark and a paddle boarder occurred at Nauset in 2016. “Good reminder to be #SharkSmart and brush up on safety recommendations,” it wrote.

“The inshore waters off many Cape Cod and South Shore beaches are preferred feeding grounds for white sharks. They come to these areas to feed on seals. While white shark encounters with humans are rare, they can happen,” warns the Atlantic White Shark Conservancy, on its website.

SHARKS IN THE WATER: THIS NEW INTERACTIVE MAP WILL SHOW YOU WHERE THEY ARE

The group advises swimmers to swim close to shore, where their feet can touch the bottom and to swim, paddle, kayak, and surf in groups. “Do not swim alone in the ocean at dawn or dusk,” the Conservancy adds.