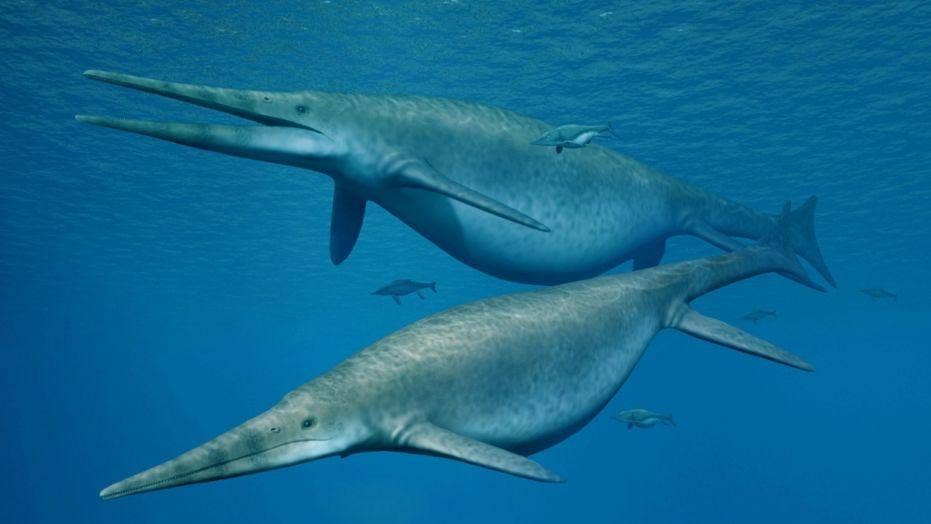 The massive jawbone of a 205-million-year-old ichthyosaur has been discovered in southwestern England, making it "one of the largest animals to ever live" — it was nearly the size of a blue whale.

The findings, published in the journal PLOS, show that the ichthyosaur lived close to the time of the Late Triassic extinction event and could represent the largest known fossil of an ichthyosaur ever found.

Experts estimate the body of the ichthyosaur was approximately 85 feet in length. By contrast, blue whales can reach nearly 100 feet in length and weigh as much as 200 short tons, with females generally outweighing males.

"The largest reported ichthyosaurs lived during the Late Triassic (~235–200 million years ago), and isolated, fragmentary bones could be easily mistaken for those of dinosaurs because of their size," the study's abstract reads.

The reinterpretation of the bones may also help solve a 150-year-old mystery. In 1850, a large bone from the Late Triassic period was discovered near Aust Cliff in Gloucestershire, U.K, and it was originally thought to be from a giant dinosaur.

"[The] Aust bones, previously identified as those of dinosaurs or large terrestrial archosaurs, are jaw fragments from giant ichthyosaurs. The Lilstock and Aust specimens might represent the largest ichthyosaurs currently known."

"One of the Aust bones might also be an ichthyosaur surangular," University of Manchester ichthyosaur expert Dean Lomax said in a press release. "If it is, by comparison with the Lilstock specimen, it might represent a much larger animal. To verify these findings, we need a complete giant Triassic ichthyosaur from the U.K. – a lot easier said than done!”

In the press release, fossil collector and co-author of the study Paul de la Salle notes the bone was found on a beach in Lilstock, Somerset in May 2016. He eventually returned to the site to get more bone fragments, before potentially realizing what he had found.

“Initially, the bone just looked like a piece of rock but, after recognizing a groove and bone structure, I thought it might be part of a jaw from an ichthyosaur and immediately contacted ichthyosaur experts Dean Lomax (University of Manchester) and Prof. Judy Massare (SUNY College at Brockport, NY, USA) who expressed interest in studying the specimen," de la Salle said in the release.

"I also contacted Dr. Ramues Gallois, a geologist who visited the site and determined the age of the specimen stratigraphically."

Lomax and Massare deciphered that the bone is part of the lower jaw of the giant ichthyosaur after comparing it with other specimens, including the largest ichthyosaur ever known, the shastasaurid Shonisaurus sikanniensis, which was approximately 68 feet long.

“As the specimen is represented only by a large piece of jaw, it is difficult to provide a size estimate, but by using a simple scaling factor and comparing the same bone in S. sikanniensis, the Lilstock specimen is about 25 percent larger," Lomax added.

Ichthyosaur means "fish lizard," an apt way to describe the giant sea-dwelling creature. The earliest known ichthyosaurs had long, flexible bodies and likely swam similar to modern-day eels, according to an article from the University of California Berkely.

Some ichthyosaur fossils discovered have shown the creatures to giving birth to live, developed young. Unlike dinosaurs, which ichthyosaurs have been confused for, they did not lay eggs.