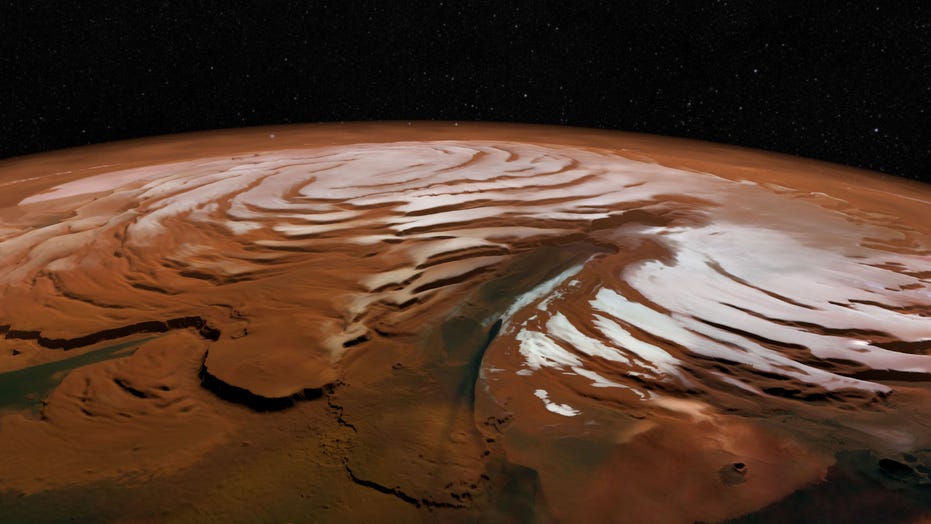 Can the Trump administration make it happen? Former astronaut Andy Allen weighs in.

Scientists have discovered layers of ice buried a mile beneath Mars’ north pole that could help unlock the Red Planet’s history.

Experts from the University of Texas at Austin and the University of Arizona harnessed the Shallow Radar (SHARAD) on NASA’s Mars Reconnaissance Orbiter (MRO) to make the discovery. The ice, they say, could be the remains of ancient polar ice sheets and could be one of Mars’ largest reservoirs.

The study describing the discovery is published in the journal Geophysical Research Letters.

"We didn’t expect to find this much water ice here,” said lead author Stefano Nerozzi, a graduate research assistant at the University of Texas Institute for Geophysics (UTIG) and doctoral student at the Jackson School of Geosciences, in a statement. “That likely makes it the third largest water reservoir on Mars after the polar ice caps.”

The layers of ice are a record of Mars’ past climate, similar to the way that tree rings record Earth’s past climate, scientists say. This could provide a valuable clue as experts attempt to work out whether conditions on the Red Planet were conducive to life.

The polar ice, if it was melted, would equal a global layer of water around Mars measuring at least 5 feet deep. “Surprisingly, the total volume of water locked up in these buried polar deposits is roughly the same as all the water ice known to exist in glaciers and buried ice layers at lower latitudes on Mars, and they are approximately the same age,” said Jack Holt, a professor at the Lunar & Planetary Laboratory of the University of Arizona, in the statement.

The researchers’ findings were corroborated by an independent study led by researchers at John Hopkins University that used gravity data, as opposed to radar.

Scientists are tapping sophisticated technology to reveal the Red Planet’s secrets. In a separate project earlier this year, for example, experts spotted a huge new impact crater on Mars.

The crater, which was also spotted by NASA’s MRO, was created sometime between July and September 2018, according to scientists involved in the High Resolution Imaging Science Experiment (HiRISE).

Managed by the University of Arizona, the powerful HiRISE camera is one of six instruments on the MRO.

A composite image that shows alternating layers of ice and sand in an area where they are exposed on the surface of Mars. The photograph, taken with the Mars Reconnaissance Orbiter's HiRISE camera, has been adjusted to show water ice as light-colored layers and sand as darker layers of blue. (Credit: NASA/JPL/University of Arizona)

Last year, in a major announcement, NASA revealed that its Curiosity Mars rover has found organic molecules on the Red Planet. Also in 2018, NASA released the first-ever audio recording from Mars.

In November, NASA announced that it has selected the location where its Mars 2020 Rover will land on the Red Planet. The rover is expected to reach the Martian surface on Feb. 18, 2021.

NASA’s long-term goal is to send a manned mission to Mars in the 2030s. However, former astronaut Buzz Aldrin thinks that a slightly later target date of 2040 is more realistic. In an interview in 2016, the Gemini 12 and Apollo 11 astronaut told Fox News that by 2040, astronauts could visit Mars’ moon Phobos, which could serve as a sort of stepping stone to the Red Planet.