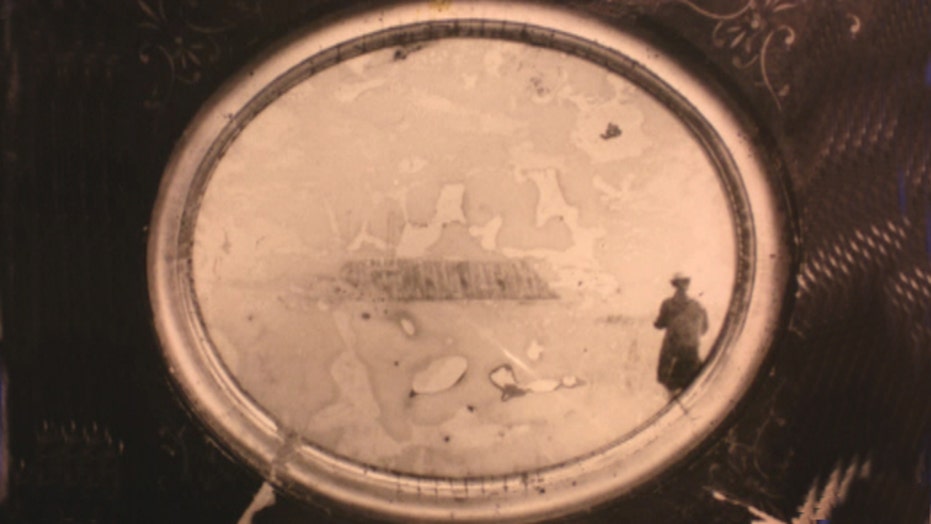 For decades, experts thought image was a key piece of history

A photograph that has posed a Civil War mystery, puzzling historians for three decades, appears to be a long-surviving hoax.

The mysterious photograph of what appeared to be a far older photo — showing a figure in a coat and hat and the blurred image of a warship — surfaced in 1986. Some historians believed it might be a photo of the CSS Georgia, a Confederate ironclad that sank 150 years ago in Georgia as Union troops captured Savannah.

The image was believed to be the only known photo of the CSS Georgia.

The man who photographed the picture, John Potter, initially said he found it at a yard sale but couldn't afford to buy it. Now Potter tells The Associated Press the photo is a fake he made as a teenager using a 2-foot model of the ship and his brother in costume standing in a marsh.

It was a picture taken of another photo in a peeling, gilded frame. In the foreground stood a man, his back to the camera, wearing an overcoat and a hat. In the center, visible amid stains and apparent water damage, was a ship.

The 1,200-ton ship CSS Georgia was built in 1862, armored with strips of railroad iron and never fired a shot in combat after it was built to defend the Georgia coast in the Civil War. Confederate sailors scuttled their ship in December 1864 as Gen. William T. Sherman's Union troops captured Savannah.

No blueprints survived and period illustrations varied in their details. The photo would confirm details of the Georgia's design, if only it could be authenticated. Records show John Potter donated a copy of the picture of the photo to the Georgia Historical Society in March 1986.

Todd Groce, CEO of the Georgia Historical Society, described the hoax as "regrettable" in a statement released on Monday, but noted that the society has never presented the image as an authenticated photo of the CSS Georgia.

The image prompted a "mixed" response from experts consulted on its authenticity, according to Groce. "With no clear evidence or consensus the image was cataloged as 'purported to be the CSS Georgia' and not as an authentic photograph of the CSS Georgia," he said.

Earlier this year the Army Corps of Engineers launched a major effort to raise the ironclad’s wreckage as part of the Savannah Harbor Expansion Project. Items recovered from the CSS Georgia include pottery, leg irons, and gun carriage parts.

As the $14 million project kicked off, archaeologists publicized the image online and in news stories — including an Associated Press story — hoping to track down the original photo.

Robert Holcombe, former curator of the National Civil War Naval Museum, told the AP in February that while the original photograph would be needed to confirm if the image was authentic, he believed it was real.

"Most people seem to think so," he said. "Or else it's an awfully good fake."

Now the man who took that photo of the photo all those years ago says he wants to clear the record: It is a fake.

Here was the story John Potter told 30 years ago:

The Savannah native was at a yard sale when he found the photograph in an antique frame. Inscribed on the back of the frame was "CSS Georgia." He couldn't afford it, so he took a photo and mailed it to historical groups in Savannah.

Here is his new story, which he told exclusively to The Associated Press:

When he was a teenager in Savannah, Potter, his brother Jeffrey and a friend shot a short 8mm movie about the CSS Georgia. They built a 2-foot model.

At some point, Potter decided to test whether he had the skills to become a Hollywood special effects artist.

Potter’s younger brother put on a coat and straw hat and went out to a marsh with a cane fishing pole and Potter took a photo. He took another photo of the model. He glued the boat's image onto the photo of his brother, then used dirt and glue to "age" the photo.

Potter sent the photo to historical groups, setting off a sporadic search for a CSS Georgia photo that he now says never existed.