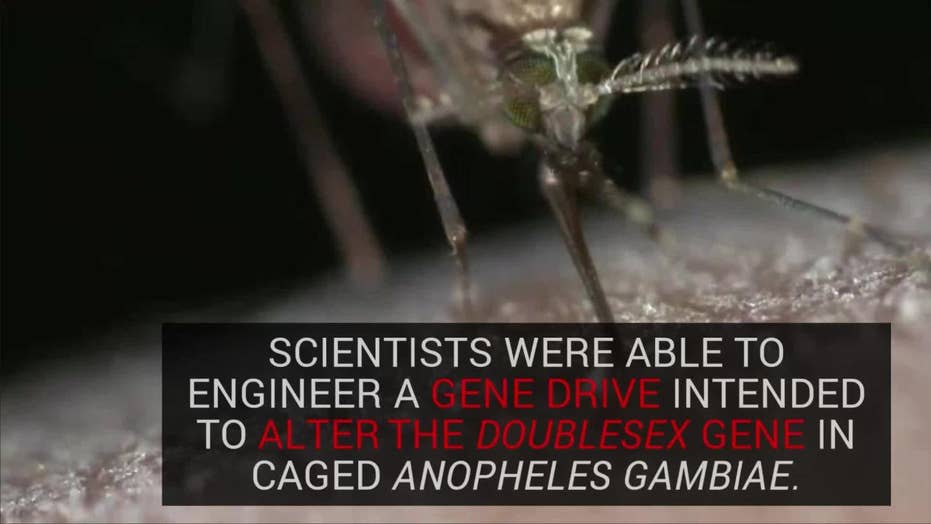 Experiment that kills mosquitoes to stop malaria a success

Researchers at Imperial College London were able to stop the reproduction of caged Anopheles gambiae, a species of mosquito that is one of the major culprits in the spread of malaria.

Scientists in the U.K. have eliminated malaria-carrying mosquitoes in lab experiments touted as a breakthrough in the battle against the killer disease.

There were 216 million malaria cases worldwide in 2016, according to World Health Organization data, which resulted in 445,000 deaths, most of which were children under the age of five.

Researchers at Imperial College London used the CRISPR-Cas9 gene editing technology to spread a genetic modification that blocked female reproduction in the lab mosquitoes. The research study is published in the journal Nature Biotechnology.

CRISPR, which has been compared to a pair of “molecular scissors,” lets scientists alter or replace specific sections of DNA.

The team used a technique called “gene drive” to target the mosquito species Anopheles gambiae that is responsible for transmitting malaria in sub-Saharan Africa.

Scientists were able to “crash” the caged population of mosquitoes in just 7 to 11 generations. Researchers specifically targeted a 'doublesex' gene that determines a mosquito’s gender. The “gene drive” altered part of the gene responsible for female development. “Males who carried this modified gene showed no changes, and neither did females with only one copy of the modified gene. However, females with two copies of the modified gene showed both male and female characteristics, failed to bite and did not lay eggs,” they explained in a statement.

After eight generations, no females were produced and the mosquito populations collapsed because of lack of offspring, according to the study.

“This breakthrough shows that gene drive can work, providing hope in the fight against a disease that has plagued mankind for centuries,” said lead researcher, Professor Andrea Crisanti, in a statement. “There is still more work to be done, both in terms of testing the technology in larger lab-based studies and working with affected countries to assess the feasibility of such an intervention.”

Crisanti says it will be some time before the gene editing is used on mosquitoes outside of a laboratory setting. “It will still be at least 5-10 years before we consider testing any mosquitoes with gene drive in the wild, but now we have some encouraging proof that we’re on the right path,” he said. “Gene drive solutions have the potential one day to expedite malaria eradication by overcoming the barriers of logistics in resource-poor countries.”

The World Health Organization reported in November that the global response to malaria is at a crossroads. There were an estimated 5 million more malaria cases in 2016 than the prior year, it said.

“2016 marked the first time in over two decades that malaria cases did not fall year-on-year despite huge efforts and resources, suggesting we need more tools in the fight,” said Crisanti.

An estimated $2.7 billion of funding was invested in malaria control and elimination efforts during 2016, according to WHO data. However, the organization warns that the 2016 funding was still well below the $6.5 billion annual investment required by 2020 to meet the 2030 targets of the WHO’s global malaria strategy.

Only 40 related species of the approximately 3,500 mosquito species worldwide can carry malaria, according to Imperial College London.

Technology could prove a vital weapon in the fight against the malaria-carrying insects. In a separate project earlier this year, scientists at Johns Hopkins University genetically engineered malaria-resistant mosquitoes.

Gene editing has been generating plenty of buzz in recent years.

Last year scientists in another project harnessed gene-editing technology to eliminate viruses in pigs that could be harmful to people, potentially laying the foundations for pig-to-human organ transplants.

Researchers have also  used gene-editing to correct a disease-causing gene mutation in human embryos, preventing the mutation from passing to future generations. In the stunning discovery, a research team led by Oregon Health and Science University reported that embryos can fix themselves if scientists jump-start the process early enough.