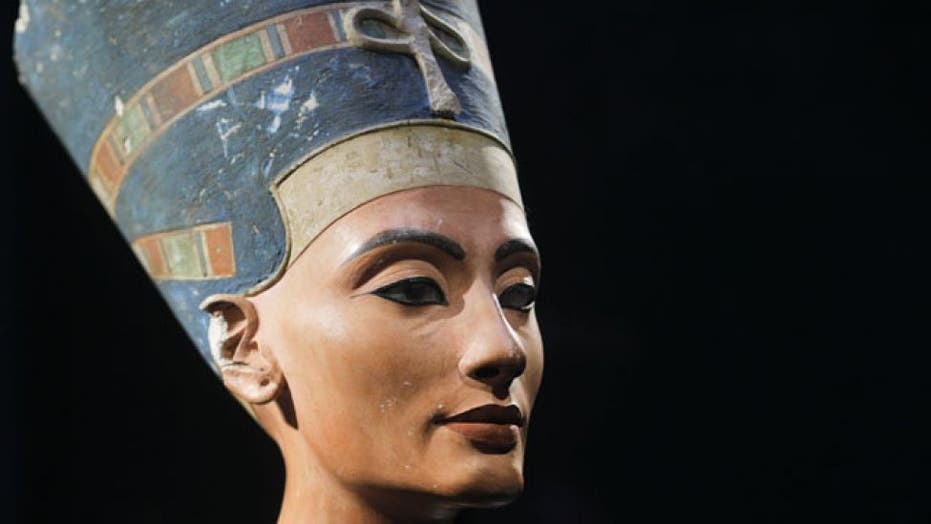 Strange spots on King Tut's burial chamber's walls explained by experts amid restoration of his tomb.

A new radar survey of King Tutankhamun’s tomb has reportedly found evidence of a hidden chamber that has revived talk about Queen Nefertiti’s final resting place.

The survey of King Tut’s tomb was conducted by a team led by archaeologist Mamdouh Eldamaty, reports Nature, which has seen the findings of the researchers’ unpublished report. The researchers “report that they have identified a previously unknown corridor-like space a few metres from the burial chamber,” according to Nature.

Eldamaty, a former Egyptian Minister of Antiquities, and his team used ground-penetrating radar for their study. Their research was presented to Egypt’s Supreme Council of Antiquities earlier this month, Nature reports.

This undated photo shows a bust of ancient Egyptian Queen Nefertiti in the Neues Museum in Berlin. (AP)

Fox News has reached out to Egypt’s Ministry of Antiquities with a request for comment on this story.

The possibility that secret chambers are hidden in King Tut’s tomb, possibly containing Nefertiti’s remains, has proved a contentious topic in recent years. Previous studies of the famous tomb have generated massive interest around the world.

The area identified by Eldamaty and his team is slightly northeast of the tomb, according to Nature. Separate projects had previously targeted the tomb’s northern wall as an area where a hidden room could be located.

In this Sept. 10, 2014 file photo, a 3,300-year-old bust of Queen Nefertiti stands on its socle, at the New Museum in Berlin, Germany. (AP Photo/Markus Schreiber, File)

In 2018 Egypt's Antiquities Ministry announced the results of sophisticated radar scanning technology, which found no new rooms. Officials said that the scan ended years of debate about whether the rooms exist or not.

IS THIS THE FACE OF TUTANKHAMUN?

In 2018, Mostafa Waziri, Secretary General of the Supreme Council of Antiquities, said an Italian team conducted extensive studies with ground-penetrating radar that showed the tomb did not contain any hidden, man-made blocking walls as was earlier suspected. Francesco Porcelli, of the Polytechnic University of Turin, presented the findings at an international conference in Cairo.

Egypt’s Antiquities Ministry noted that the National Geographic scan, and a scan by Japanese scientists, had proved inconclusive. The ground-penetrating radar data obtained by the Italian team closed the lid on the tomb having such hidden secrets, it said, in 2018.

KING TUTANKHAMUN BOMBSHELL? MYSTERIOUS PHARAOH MAY HAVE BEEN A BOY SOLDIER

Additionally, some archaeologists believe the mummy of Nefertiti, fabled for her beauty, has already been found in a different tomb.

Nov. 5, 2015: Egypt's famed King Tutankhamun's golden sarcophagus is displayed at his tomb in a glass case at the Valley of the Kings in Luxor. (AP Photo/Amr Nabil)

King Tutankhamun’s tomb in the Valley of the Kings, which was full of spectacular artifacts, was discovered by British archaeologist Howard Carter in 1922.

Tutankhamun continues to fascinate historians. Stunning research released in 2018, for example, claims Tutankhamun may have been a boy soldier, challenging the theory that the King was a weak and sickly youth before his mysterious death at around 18 years of age.

In 2014, a BBC documentary used state-of-the-art technology to perform a ‘virtual autopsy’ on King Tutankhamun’s 3,000-year-old remains. By using 2,000 Computerized Tomography (CT) scans of the pharaoh’s mummified body, scientists created a full-size computer-generated image of Tutankhamun. The virtual autopsy indicated that the boy king suffered from a genetic bone wasting disease and a club foot, making him unable to walk unaided.

Another theory suggests that Tutankhamun died in a chariot crash.

In 2012, scientists confirmed that a dagger found among the treasures in King Tut’s tomb was made with iron from a meteorite.