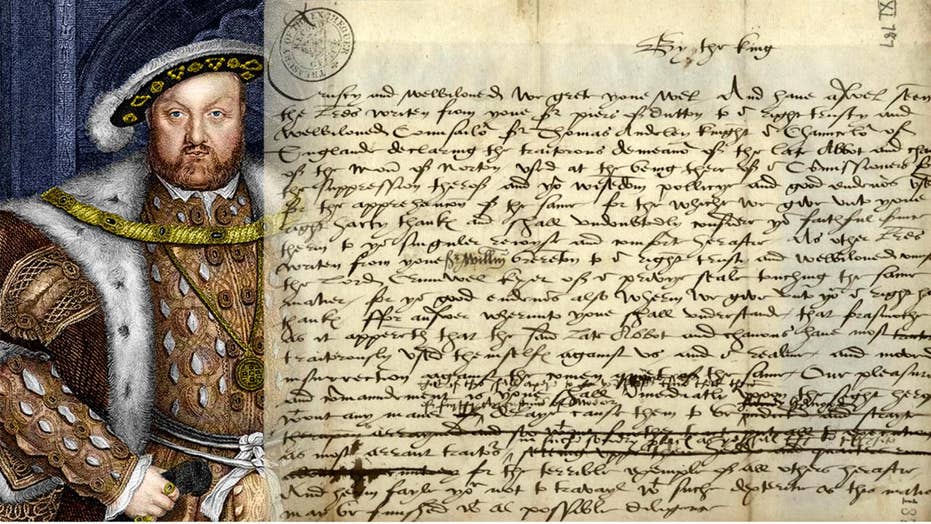 The bloodthirsty draft of a letter by King Henry VIII in which he demands a monk's violent death is set to go on public display.

The bloodthirsty draft of a letter by King Henry VIII in which he demands a monk’s violent death is set to go on public display.

In the 16th-century death warrant, the famous king orders that the abbot of Norton Abbey in the North of England be “hung drawn and quartered,” but then decides that the clergyman should just be hanged.

The 1536 letter, which is on loan from the U.K.’s National Archives, is set to go on display at the Norton Priory Museum in Runcorn, Northern England, starting May 5.

It is thought that Henry dictated the letter to a secretary. The monarch apparently changed his mind over the abbot’s fate, SWNS reports, noting that the words “drawn and quartered” are crossed out.

Experts believe that the bloodthirsty letter was dictated to a secretary by King Henry VIII. (© Norton Priory Museum & Gardens / SWNS.com)

Frank Hargrave, director of Norton Priory Museum and Garden, told Fox News that the letter is significant for two reasons. “Because it is a corrected draft we can almost read the thoughts of the king before he has had a chance to calm down or speak to his advisors,” he explained. “His initial fury is evident and the demand that the abbot be hanged, drawn and quartered is extreme — this was a fate usually reserved for traitors.”

“The other reason it is important is that it shows the level at which the king involved himself wherever his power was affronted,” he added.

EARLY CHURCH DISCOVERED ON UK HOLY ISLAND, MAY BE LINKED TO MEDIEVAL SAINTS

Henry VIII’s reign was a turbulent period, marked by religious tension as the King severed England, Wales and Ireland’s relationship with the Catholic Church in Rome. The Acts of Supremacy in 1534 recognized the King as the Supreme Head of the Church of England.

Henry’s letter was written in response to the news that clergymen and local people had stopped his men from closing Norton Abbey. (iStock)

Two years later, the king oversaw the Dissolution of the Monasteries, an attempt to destroy the country’s Catholic monastic system and seize its assets.

Henry’s letter was written in response to the news that clergymen and local people had stopped his men from closing Norton Abbey. “Henry VIII saw this as a personal attack on his rulle and supremacy and we can almost hear the king’s outrage in the way the clerk has to amend the document to include Henry’s demands," Sean Cunningham, Head of Medieval at The National Archives, told Fox News, via email. "The amendments to this warrant show how he intervened to change the instructions to reflect his anger before his requirements were sent up the administrative chain to the Crown’s officials and agents."

The fact that the king changed his mind when deciding the abbot’s fate may reflect the era’s atmosphere of political and religious upheaval, according to Hargrave.

“The north of England was out of step with the rest of the country at this time – far more conservative and in favor of the traditions of the Catholic Church so open rebellion was a real threat,” he told Fox News. “Someone more in tune with the local situation may have convinced the King that such a cruel sentence would martyr the abbot and exacerbate problems in the northwest.”

Historians think that the abbot targeted by the king was likely a man called Robert Jannyns. “An investigation in 1522 suggested that he was corrupt with stories that he had fathered a son ‘with a club foot’ within the local community although these kinds of stories were often fabricated by Henry’s commissioners as they were encouraged to dig up as much dirt as they could,” Hargrave told Fox News. “Probably to help the dangerous situation in the northwest, a local aristocrat, Sir William Brereton managed to have the Abbot’s death sentence cancelled and he and his canons were pensioned off with the closure of Norton Abbey.”

The king’s letter will be displayed at the museum until the end of August. To illustrate the wealth of the monasteries during the period, it will be accompanied by a stunning 16th century silver-gilt monstrance from the Victoria and Albert Museum. Monstrances are used for the veneration of hosts in the Catholic Church.

Last year, archaeologists in London uncovered the lost remains of Greenwich Palace, the birthplace of Henry VIII and Elizabeth I.

This story has been updated with comments from Sean Cunningham, Head of Medieval at The National Archives.