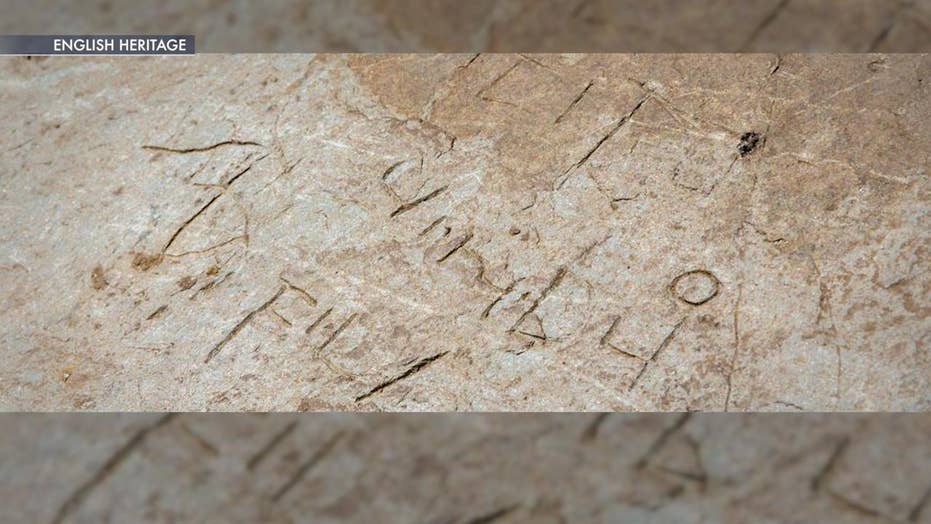 A 2-foot slate inscribed with ancient letters and Christian symbols has been found a Tintagel Castle in Great Britain. Find out what experts say this discovery could reveal.

A mysterious inscription from the seventh century has been discovered in the ruins of an English castle associated with the legend of King Arthur.

The inscription, which combines Latin writing, Greek letters and Christian symbols, was found on a 2-foot stone at Tintagel Castle, on the coast of Cornwall. Experts believe that the strange mixture of text and symbols may indicate that someone was practicing writing a text.

Experts from the Cornwall Archaeological Unit (CAU), supported by English Heritage, which manages the site, made the discovery last summer.

The Latin inscription underlines the lingering influence of Roman culture in Britain long after the departure of the Roman troops and officials in the fourth and fifth centuries. “The survival of writing from this period is rare and this is a very important find, especially in terms of the continuity of a literate Christian tradition in post-Roman Cornwall,” explained Michelle Brown, a writing expert from the University of London, in a statement.

“The lettering style and language used, as well as Christian symbols exhibiting Mediterranean influence and contacts, all reveal precious clues to the culture of those who lived at Tintagel in the seventh century.”

Brown deciphered the inscription with textual expert Oliver Padel, an honorary research fellow in the Department of Anglo-Saxon, Norse and Celtic at the University of Cambridge.

“[The text] suggests a high level of literacy and an awareness of contemporary writing styles associated with the early illuminated manuscripts of Britain and Ireland,” Brown added. The scribe, she believes, was likely practicing a series of words and phrases.

The inscribed slate stone includes both Roman and Celtic names - ‘Tito’ (Titus) and ‘Budic,’ which hints at a multicultural seventh century community at Tintagel. The Latin words ‘fili’ (son) and ‘viri duo’ (two men) also feature on the stone, which served as a window ledge.

The stunning cliff-top ruins of Tintagel have long fascinated historians. The castle, which is half on the Cornish mainland and half on a jagged headland that juts into the sea, is described by English Heritage as one of the most spectacular historic sites in Britain.

Tintagel is also associated with the legendary figure of King Arthur. The site inspired the 12th-century writer Geoffrey of Monmouth to name it in his “History of the Kings of Britain” as the place where King Arthur was conceived, according to English Heritage.

This, however, is not the first stone inscribed with early medieval writing that has been discovered at Tintagel. In 1998, a stone inscribed with several words including the Celtic name ‘Artognou,’ was found at the site. A number of people wrongly interpreted the name as a version of ‘Arthur,’ according to English Heritage.