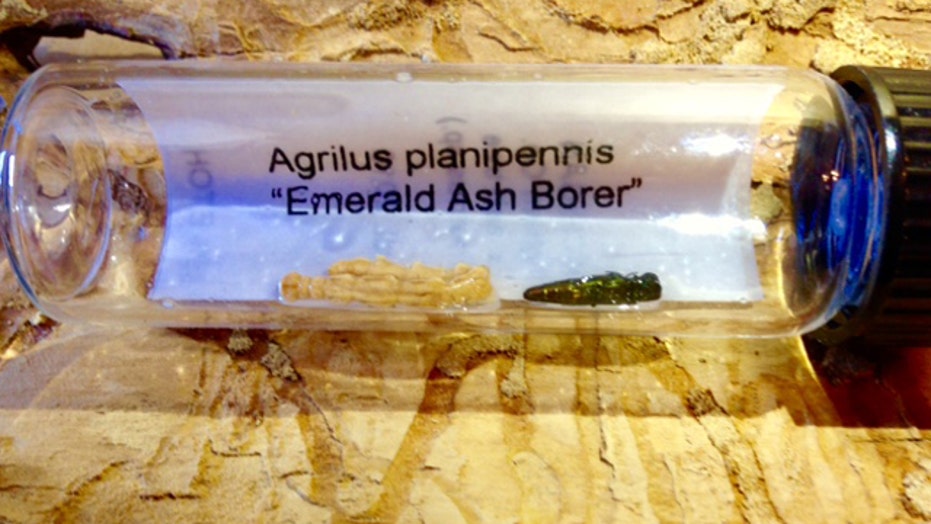 Ash trees in almost half of U.S. states and parts of Canada are under attack by a very small killer called the Emerald Ash Borer (EAB).

Native to East Asia, the tiny metallic green beetle is not much bigger than the head of Abraham Lincoln on a penny, and trees have no natural resistance to it. The bug was first found in Michigan back in 2002 after being transported in firewood from overseas. It’s fatal to ash trees, killing them after only a few years of infestation.

In the U.S., projected costs to remove or treat ash trees are in the billions of dollars over the next 20 years. According to a report millions of ash trees in North America have been lost to the beetle already and millions more will be impacted. It is the most destructive and invasive insect to ever hit U.S. forests.

The Iowa Department of Natural Resources (DNR) estimates the beetle will cost Iowa taxpayers more than $4.1 billion over the next two decades. That figure is only for ash trees on public property - homeowners will have to take care of their own trees out-of-pocket.

Economic impacts come from costs to remove the trees, loss of shade the trees provide, which means higher energy costs, reduction of landscape value, and the cost to replace the ash trees.

Tivon Feeley is leading the EAB efforts at the Iowa DNR’s Forestry Bureau. While the metro area of Iowa’s capital is just now seeing the bug on the outskirts of the city, the state has been trying to stop the spread of the bug since 2010 when it was found near the Minnesota border.

“Every state is in the same situation right now that has the Emerald Ash Borer,” said Feeley. “They’re looking at ‘how do we take down all of these trees, what do we do with all of the wood-waste?’ Nobody has the silver bullet. This is a pest that’s here, it’s in the United States, and we’re going to have to deal with it.”

The beetle bores into the wood of ash trees and lays eggs. Then white grub-like larvae slowly kill the trees by cutting off nutrients underneath the bark, which then causes the trees to lose their canopy of leaves and slowly crumble. One sign of an EAB infestation is a loss of bark from woodpeckers trying to get to the larvae.

“The easiest sign is when your tree is getting attacked by woodpeckers,” said Nathan Unsworth, Administrative Superintendent for the City of Newton, a small community in Iowa that’s dealing with an infestation of the EAB.

Other signs to look for on ash trees are “D” shaped holes where the adult beetles leave the trees and “S” shaped grooves on the inside of the bark caused by the larvae. Adult beetles will begin leaving trees in the summer and can fly about a half-mile or so to lay new eggs. But the EAB larvae can also be easily transported over long-distances when people move ash firewood.

“I think people know about the pest, I think they’re just now becoming aware of how serious this pest is going to be,” said Feeley.

In Iowa alone there are 3.1 million urban ash trees on public property that will have to be removed or treated by tax-payer money, according to a 2012 survey. And some 52 million woodland ash trees.

“The amount of trees that are going to be impacted by this - there’s definitely going to be a strain on taxpayers, cities, states, counties, all across the board,” said Unsworth.

Removal isn’t the only way to deal with the pest. Chemical treatments can protect the trees but are costly and have to be done every year. If left untreated, ash trees will dangerously crumble over time and can become two or three times more expensive to remove.

If you suspect you have emerald ash borer, call your state forestry department or a reputable arborist. If your state is quarantined, do not transport firewood out of infected states.

For more information on the beetle go to www.emeraldashborer.info.