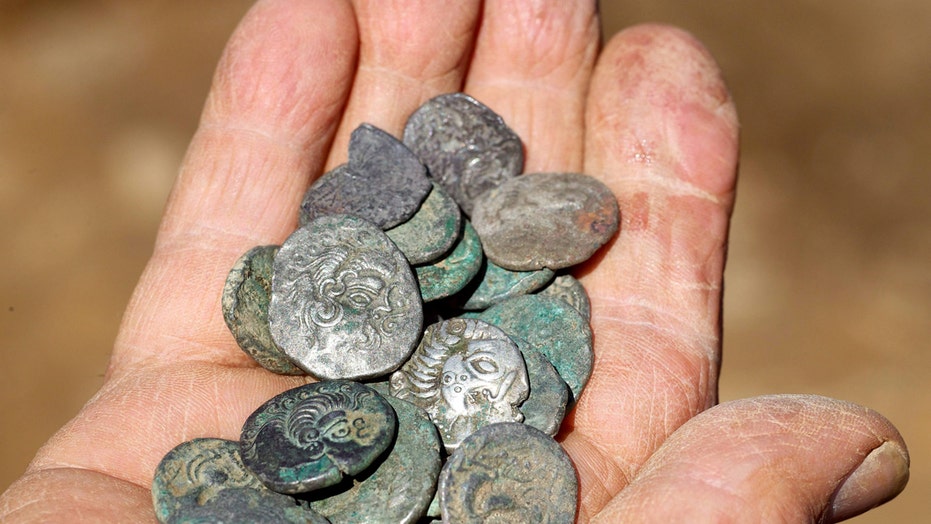 A giant discovery of nearly 70,000 coins from the Iron Age has set a Guinness World Record for being the largest of its kind discovered in the British Isles.

Discovered in January 2012, the collection of 69,347 coins was found in Jersey by metal detector enthusiasts Reg Mead and Richard Miles, British news agency SWNS reports. The hoard is estimated to be worth approximately $13 million.

The previous record was set more than 40 years ago when 54,951 Iron Age coins were located in Wiltshire in 1978, the news agency added.

A bumper Iron Age coin hoard has been officially recognized as a Guinness World Record for the largest ever of its kind recovered in the British Isles. (Credit: SWNS)

Some of the coins, which are estimated to date around 50 B.C., are on display at the La Hougue Bie Museum in Jersey.

"We are not surprised at this achievement and are delighted that such an impressive archaeological item was discovered, examined and displayed in Jersey," Olga Finch, curator of archaeology for Jersey Heritage, told SWNS."Once again, it puts our Island in the spotlight of international research of Iron Age coinage and demonstrates the world class heritage that Jersey has to offer."

Neil Mahrer, Conservator for the Jersey Heritage Museum inspects some of the coins uncovered in Europe's largest hoard of Iron Age coins worth up to GBP10 million. (Credit: SWNS)

Mead and Miles were first tipped off about the find in the 1980s from an onlooker, but it had taken some time to locate it, dig them up and make sure they were authentic. The silver and gold coins were discovered under a hedge in a large mound of clay.

Metal detectorists Reg Mead and Richard Miles first discovered the Celtic coins in Jersey in 2012 after a 30-year search. The final number of coins found in the hoard has now been confirmed as a remarkable 69,347. (Credit: SWNS)

The least valuable coins in the hoard are worth $130 (100 British pounds), making it likely the massive hoard is worth several million dollars. It has been designated as a "treasure" under the 1996 Treasure Act, which signifies the finders are entitled to a reward, though it officially belongs to the Queen.

Rare coins are big business. Last year, an extremely rare half-dollar coin from 1838 was sold at auction for $504,000.

An extremely rare 1894 dime, one of only 24 minted and once owned by former Lakers owner Jerry Buss, recently sold at auction for $1.32 million, including the buyer’s commission.