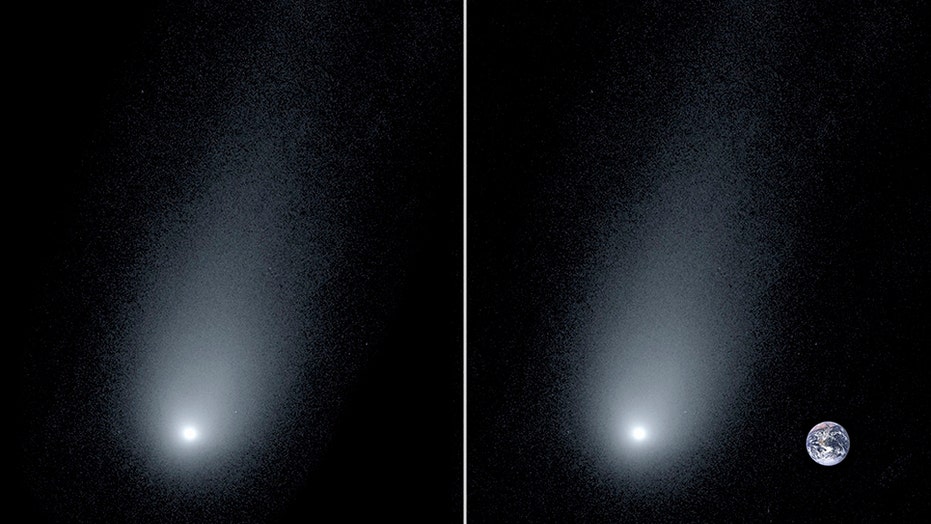 A new photo of the second interstellar object ever discovered, Comet 2I/Borisov, shows off the mysterious comet and its impressive tail.

The image, taken by astronomers at Yale University, details the scope of the comet’s tail, which is nearly 100,000 miles long — roughly 14 times the size of Earth.

“It’s humbling to realize how small Earth is next to this visitor from another solar system,” Yale astronomer Pieter van Dokkum said in the statement.

Left: A new image of the interstellar comet 2l/Borisov. Right: A composite image of the comet with a photo of the Earth to show scale. (Pieter van Dokkum, Cheng-Han Hsieh, Shany Danieli, Gregory Laughlin)

The new image was taken on Nov. 24 from the Keck Observatory in Hawaii.

The interstellar comet was discovered on Aug. 30 by astronomer Gennady Borisov. Unlike its predecessor, Ouamuamua, it will be observable for an extended period of time.

In September, NASA JPL said 2I/Borisov is approximately 260 million miles from the sun and will reach its closest point, known as perihelion, on Dec. 8, 2019, when it gets within 190 million miles of the sun.

“Astronomers are taking advantage of Borisov’s visit, using telescopes such as Keck to obtain information about the building blocks of planets in systems other than our own,” Yale astronomer Gregory Laughlin added in the statement.

Researchers believe the comet's nucleus is 1 mile wide and as it started to react to the Sun's warming effect, it has started to take on a “ghostly” appearance, the researchers added.

Previous images, including one from NASA's Hubble Space Telescope, have shown off 2I/Borisov's comet-like appearance.

A study published in October suggested that Comet 2I/Borisov could be carrying water on it from beyond the Solar System. If the findings are accurate, it would be the first time water from outside the Solar System has been detected.

2I/Borisov is the second interstellar object discovered, following the mysterious cigar-shaped Oumuamua, which was discovered in October 2017. No longer observable by telescopes as of January 2018, many have speculated what the object is. Some have theorized it may have been a light sail sent from an intelligent extraterrestrial civilization, a comet or an asteroid.

The mystery about its exact nature deepened late last year when NASA said it was looking at the object for two months and did not originally see it.