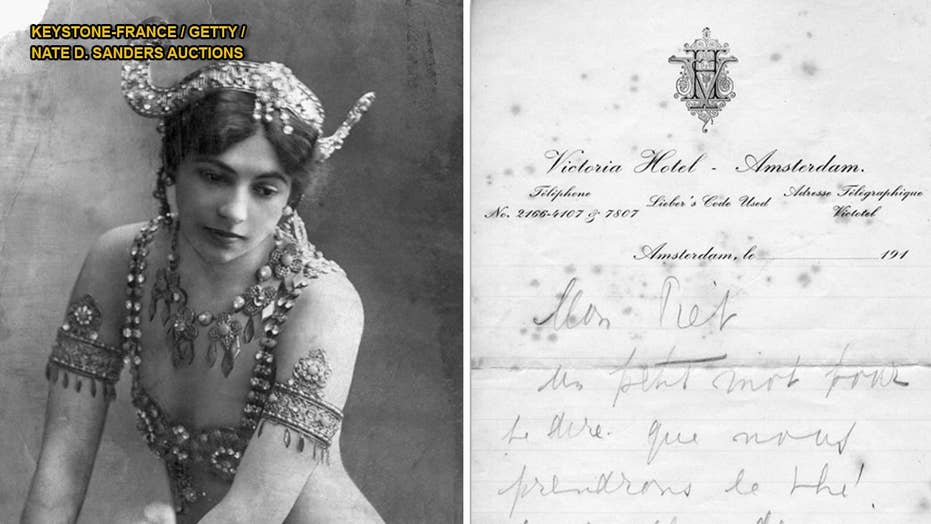 A series of love letters written by World War I spy Mata Hari, have sold at auction for $15,000. The 10 letters were written to her lover the then unknown artist Piet Van Der Hem, were written in French and Dutch and likely range from late 1914 to early 1915.

Extremely rare letters from infamous World War I spy Mata Hari to her lover have been sold for $15,000 at a Los Angeles auction.

Born Margaretha Zelle in the Netherlands in 1876, the courtesan and exotic dancer was better known by her stage name of Mata Hari. Recruited by France to spy on Germany during World War I, she was later accused of being a German double agent.

Arrested in Paris on Feb. 13, 1917, she was put on trial on July 24 of that year, charged with spying for Germany and causing the deaths of at least 50,000 soldiers. Convicted, she was executed by a French firing squad on Oct. 15, 1917. Some historians, however, think that she was a scapegoat and her execution was used as a distraction from the devastating losses France suffered during the war.

The artifacts sold by Nate D. Sanders Auctions comprise 10 letters from Mata Hari to her lover, Dutch artist Piet van der Hem. The undated letters likely range from late 1914 to early 1915, according to the auction house.

Mata Hari wrote all of the letters from the Victoria Hotel in Amsterdam, where she resided in neutral Holland after fleeing from Berlin at the start of the war. “Hari wrote about finding employment as a dancer, the Dutch reaction to her dancing style, ‘journalist pigs’ who criticized her and having van der Hem paint her portrait and design costumes for her,” the auction house explained in a statement. “She also mentioned Will van der Schalk, the wealthy banker who paid her expenses at the hotel.”

Seven of the letters are written in French and three are in Dutch.

In the letters, Mata Hari proclaims that she loves van der Hem ''only for who you are,'' and notes that she would forgive him for having ''your fun'' with her.  In same letter, she adds that she wouldn't ''take revenge'' on him, as she would with an otherwise important man who had wronged her.