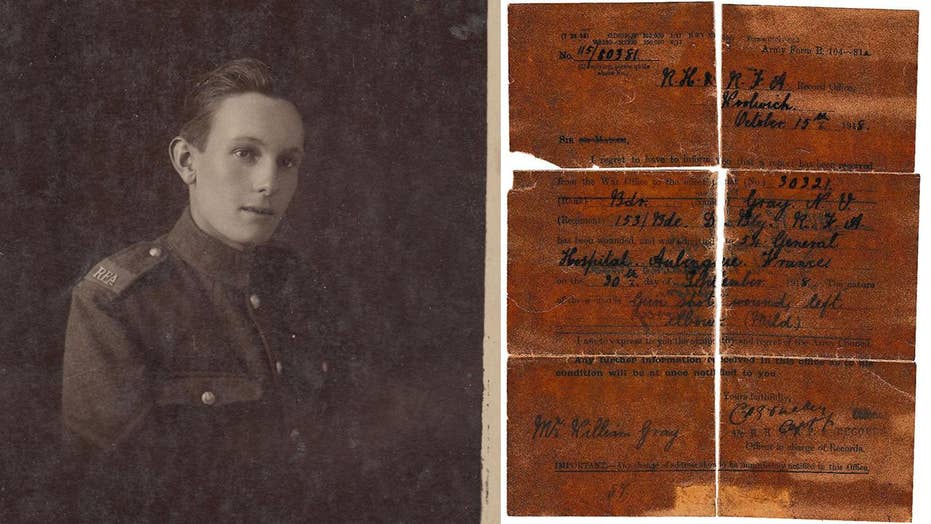 Norman Gray, a fresh-faced 19-year-old was shipped off to France in 1915 to fight in World War I. Now his diary resurfaced, documenting the horrors of war.

A remarkable archive that documents the horrors of life in the trenches of World War I is up for auction in the U.K. this weekend.

British soldier Norman Gray was just 19 years of age when he arrived at the Western Front in December 1915. Over the next three years, Gray, who served in the Royal Field Artillery, witnessed some of conflict’s worst battles.

“The diary covers three of the most famous battles of WWI including the Somme, Passchendaele, Cambrai and the fifth Battle of Ypres,” explained auctioneer Andrew Aldridge, in an email to Fox News. “The accounts of the Somme and Cambrai are remarkable but his entries for the Battle of Passchendaele are especially noteworthy giving the reader a vivid snapshot of the battle from the perspective of the Royal Field Artillery.”

His harrowing entry on the 1917 Battle of Passchendaele, for example, describes the gruesome conditions on the battlefield.

“At 4am we opened our attack to take the ridges at St Julian and Frezenberg. The weather was bad and it started to rain in the morning, while getting our breakfast the enemy dropped three or four shrapnel shells among us killing two of my mates and wounding three gunners,” he wrote. “It was a bad day for us, our casualties were very high and the ground awful. Every time we fired a gun we had to dig her out of the mud, and the rain which had been drizzling began to fall down heavy.”

Gray adds that 30 reinforcements were sent his unit, but by the next morning they were all either killed or wounded. “The advance was not going great,” he said.

An entry from Aug. 4, 1917, describes burying the dead in mass graves.

“Had two or three trips to the front line trenches, the dead were laying about in groups. Our working parties buried them in graves holding 50 to 100 each,” he wrote.