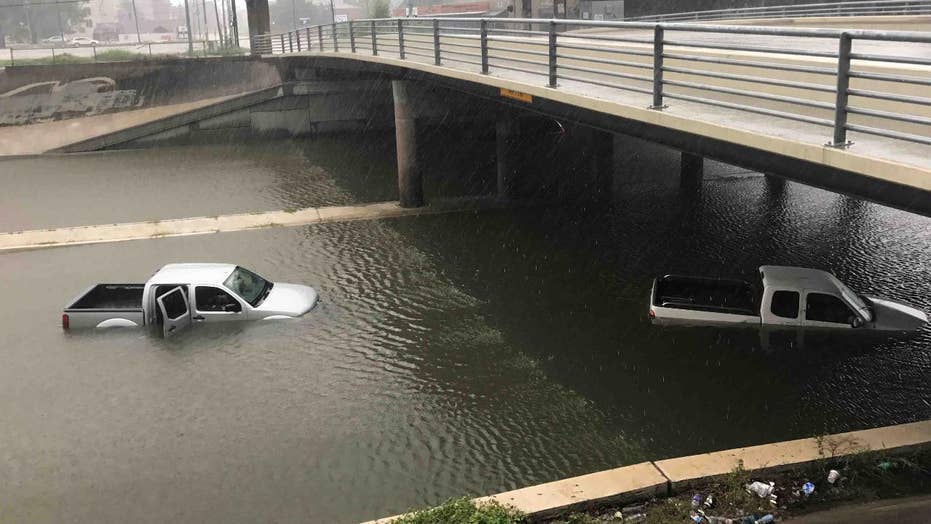 Experts are calling the flooding caused by Hurricane Harvey a ‘500-year’ flood. The meaning might not be what you think

The names of four deadly hurricanes that caused significant amounts of damage to the United States and Caribbean last year are being retired, officials announced Thursday.

The National Oceanic and Atmospheric Administration said the hurricane names Harvey, Irma, Maria and Nate are being taken off the list by the by the World Meteorological Organization.

"Storm names are retired if they were so deadly or destructive that the future use of the name would be insensitive - otherwise names are reused on a six-year cycle," the NOAA said.

2018 HURRICANE SEASON WILL BE 'SLIGHTLY ABOVE AVERAGE,' RESEARCHERS SAY

Hurricane Harvey is pictured off the coast of Texas, U.S. from aboard the International Space Station in this August 25, 2017 NASA handout photo. (NASA)

The international committee has decided that the names Harvey, Irma, Maria and Nate will be replaced with Harold, Idalia, Margot and Nigel and make their debut during the 2023 hurricane season.

Since 1954, there have been 86 names that have been retired from the Atlantic basic list, when storms began to be named. The 2005 hurricane season has the most retired names, with five for one season, including Hurricane Katrina, according to the NOAA.

The 2017 Atlantic hurricane season featured 17 named storms, of which 10 strengthened to hurricanes and six became major hurricanes at the strength of a Category 3 or higher.

Houses are seen in ruins in Codrington on the island of Barbuda just after a month after Hurricane Irma struck the Caribbean islands of Antigua and Barbuda, October 7, 2017. (REUTERS/Shannon Stapleton)

Hurricane Harvey hit Texas Aug. 25 as a Category 4 storm, killing at least 68 people and becoming the second costliest hurricane in U.S. history (after inflation) behind Katrina in 2005.

Less than a month later, Hurricane Irma caused 44 deaths and 85 indirect deaths in the Caribbean and Florida, after reaching Category 5 intensity over the Caribbean before making landfall in the Florida Keys on Sept. 10 as a Category 4 storm.

Hurricane Maria devastated Puerto Rico as a high-end category 4 hurricane on Sept. 19, causing 31 deaths in Dominica and 65 in Puerto Rico, according to the NOAA. Maria is the third costliest hurricane in U.S. history, behind Harvey and Katrina.

Power coming back on in homes six months after the storm hit the island; Bryan Llenas reports from Puerto Rico.

In early October, Nate's rainfall inundated Central America and killed 45 before it made landfall on the northern Gulf Coast as a category 1 hurricane.

The hurricane season runs from June 1 to November 30, and a pre-season forecast released last week from Colorado State University’s Tropical Meteorology Project calls for 14 named storms. Seven are predicted to strengthen into hurricanes, with three becoming major storms that are Category 3 or higher.

The research team predicts that 2018 hurricane activity will be about 135 percent of the average season.

By comparison, 2017’s hurricane season was approximately 245 percent of the average season and featured Hurricanes Harvey, Irma and Maria, which devastated parts of the United States and portions of the Caribbean.