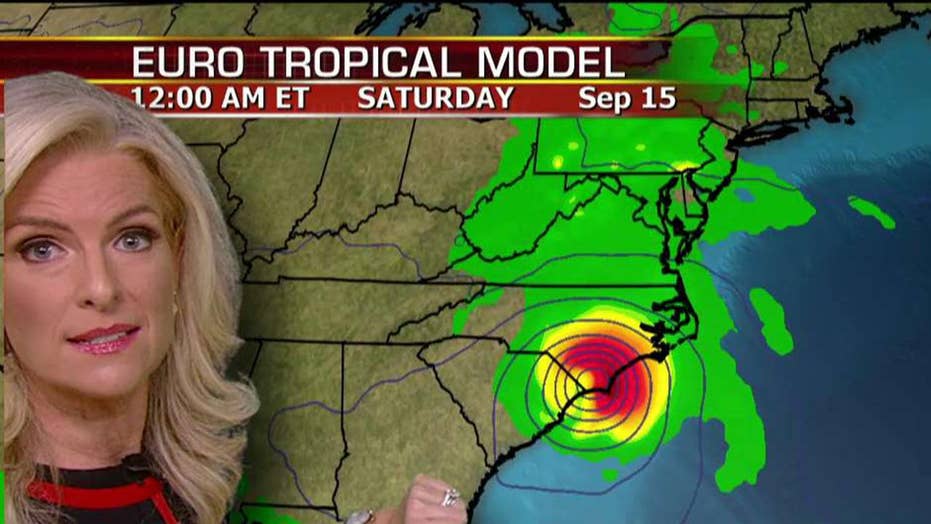 Janice Dean breaks down the storm models as the hurricane barrels towards the Carolinas.

But the storm — said to be a once-in-a-generation event for residents in the Carolinas and Mid-Atlantic states — could also result in mudslides, due to the region’s topography, a meteorologist with the National Oceanic and Atmospheric Administration’s (NOAA) National Hurricane Center warned.

“This is one of the impacts you have to be worried about,” Joel Cline, a meteorologist and tropical storm coordinator with the NOAA, told Fox News.

Hurricane-induced mudslides are a common effect when a tropical storm hits a mountainous region, such as the western half of North Carolina.

This photo provided by NASA shows Hurricane Florence from the International Space Station on Monday, Sept. 10, 2018, as it threatens the U.S. East Coast. (AP/NASA)

Areas in the Southeast experience orographic lift — when air from a low elevation is forced over a higher elevation — as air moving from the Ohio and Tennessee valleys makes its way to the Appalachian Mountains.

When this occurs, the air moves up the side of the mountains before it begins to “cool and condense,” the North Carolina Climate Office explains on its website. This effect can cause showers and thunderstorms to form.

“The three things that create a lot of rain are moisture, lift and instability [in the atmosphere]. We have two of these with tropical weather and the third is the lift — provided by the mountains in this case,” Cline said. “On the slopes that are facing the oncoming winds directly — which is a very local effect — can create localized areas of heavier rain.”

Michael Ventrice, a meteorological scientist at The Weather Company, has a similar explanation for the phenomenon.

“There's going to be a good deal of moisture advection by Hurricane Florence, towards the Appalachians. This will encourage upsloping on the leeward side of the Appalachians, which can produce very heavy precipitation through mesoscale climate interactions,” he told Fox News, noting mudslides are not a concern when a tropical storm hits a state like Texas because of its flat topography.

Parts of North Carolina have experienced a lot of rainfall in recent days, softening the ground and loosening the soil. Combined with the looming storm, the potential for mudslides is greater.

“When the upper part of a soil profile becomes quickly saturated with water, it can start to move, especially if the soil porosity differs between the upper and lower parts of the profile,” David Peterson, a research biologist and forest ecology expert at the University of Washington, told Fox News.

“Steep slopes and slopes without tree roots to hold the soil are especially vulnerable,” he noted.

As for Hurricane Florence, Ventrice said he's concerned mudslides could be triggered in areas that have "never experienced such events."

“Florence is a rare tropical cyclone due to the intensity of the system and would be a large wind-field associated with the hurricane's circulation," he added.