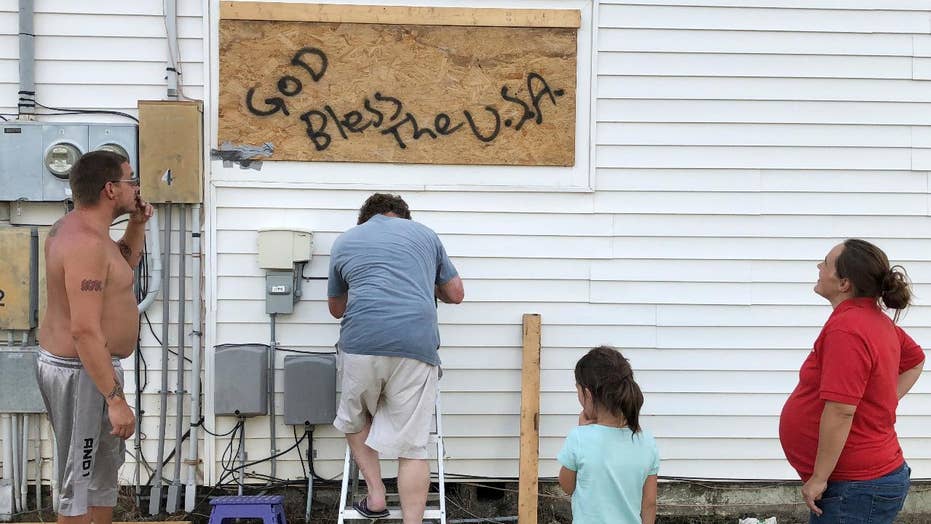 In addition to storm surges and mudslides, the Category 2 storm -- which the National Hurricane Center predicted could bring more than 20 inches of rain to some parts of North Carolina --  is expected to cause flash flooding and river overflows.

“This isn't a scientific secret; once an area is flooded, there are several things that can contaminate the water,” Joel Cline, a meteorologist and tropical storm coordinator with the NOAA, told Fox News.

Those hogs are typically housed in long metal sheds with grated floors. The floors are designed to allow the animals' urine and feces to fall through the grates and flow into nearby open-air pits, which contain “millions of gallons of untreated sewage,” AP said.

When those pits become flooded, the sewage can flow into other areas and threaten the public water supply with a variety of bacteria and disease-causing micro-organisms.

While not all hurricanes cause rivers and other water sources to overflow, Cline said the severity of the wind and rain associated with a given storm are significant factors when it comes to the likelihood of overflows.

"You don’t mess around with drinking water," he said. "In this particular case, the rain will be such that those [some] areas will be bad. Hog farmers have been told to take care of their waste pools ahead of time."

To prepare, the North Carolina Pork Council has told farmers to lower lagoon levels so they are able to absorb at least two feet of water.

"Our farmers and others in the pork industry are working together to take precautions that will protect our farms, our animals and our environment," Brandon Warren, the council president and a hog farmer, told AP.

"The preparations for a hurricane began long before the past few hours or days. Our farmers take hurricane threats extremely seriously,” he added.

Then there's the issue of wastewater treatment plants -- typically placed near rivers because “having the plant in a low-lying area allows the sewer system to use gravity to help deliver the wastewater to the treatment plant, and it positions the treatment plant to discharge the treated wastewater (referred to as effluent) into the river or stream,” according to Friends of the Kaw, a nonprofit environmental organization in Kansas. Such plants are also at risk of being submerged by floodwaters, Cline warned.

Even if water treatment plants remain operating, there’s still a chance that flooding can taint water lines, he said. Untreated human sewage contains bacteria like salmonella and parasites like cryptosporidium, and can cause potentially harmful water-related illnesses -- think hepatitis and dysentery, for instance.

Also of concern are more than two dozen massive coal ash pits operated by Duke Energy, the state's primary electricity provider. The gray ash that remains after coal is burned contains potentially harmful amounts of mercury, arsenic and lead. Many power plants’ waste pits are near lakes and rivers, which can be inundated in a hurricane.

Cline suggested residents wait to hear from public health officials before using water -- to drink or otherwise -- from the public water supply. The Department of Health in Florida, a state often hit by tropical storms and hurricanes, offered tips to purify contaminated water, such as boiling it, among other methods.