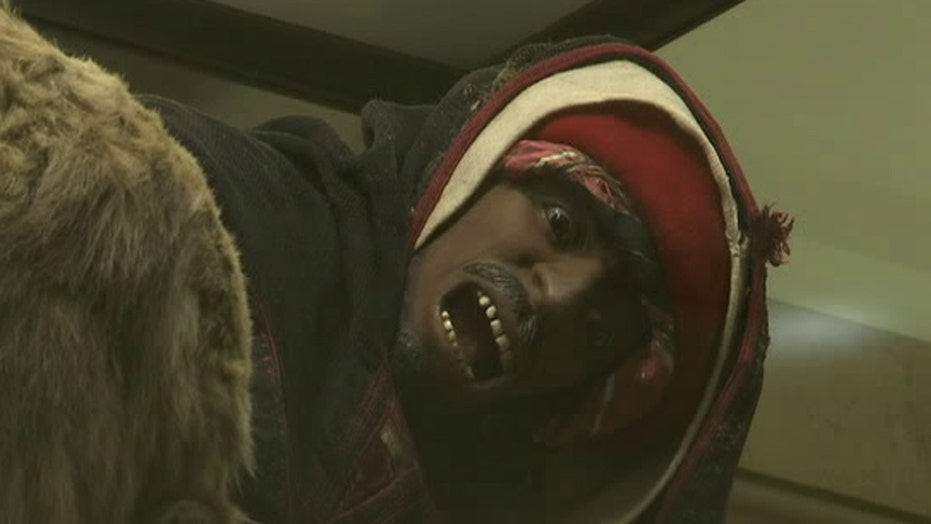 A gruesome find in a Pittsburgh museum

A grisly find in a Pittsburgh museum is turning heads. Researchers at the Carnegie Museum of Natural History found a human skull in an exhibit that was moved for restoration.

The "Lion Attacking a Dromedary" display shows a man fighting off lions while riding his camel through a North African desert. Investigators originally thought the man featured in the display was a mannequin with human teeth.

"We've known for ages that there are unidentified human teeth in the mannequin's head, and this is an opportunity to discover whether there might also be other bone fragments," Steve Tonsor the museum’s director of science and research said in a statement back in April before the restoration started. Researchers also knew the display had real animal bones.

GRISLY FIND: ROMAN-ERA MAN MAY HAVE HAD TONGUE CUT OUT

Scans during the restoration process of the diorama now show the man's skull is real.

A scan of the skull (Office of the Medical Examiner of Allegheny County).

The renovated exhibit features updated captions referencing the new findings, adding that there is ongoing research to learn more about the history behind the display. Researchers can't return the skull to its tomb because its origin is still a mystery, according to The Tribune Review.

"I never get tired of coming here," Bobby Thomas told Fox News during his latest visit to the museum he's known since he was a child, "It never gets boring for me."

Museum researchers and their partners are now working on a multi-part series explaining how the new discoveries add to the museum's understanding of the depicted era.